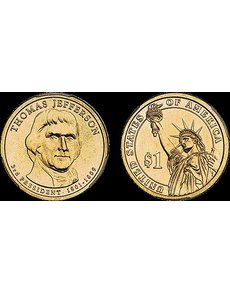 The edge inscription on these coins is particularly relevant because it includes the coin’s date and Mint mark. However, because the obverse design is changed for each president, one can easily tell the year of issue absent edge lettering.

As with all errors, some issues are more common than others. A 2008 Martin van Buren dollar graded Professional Coin Grading Service Specimen 65 sold for $58, as did a 2008 James Madison dollar graded Specimen 64.

Such is the nature of these missing edge inscription coins: issues considered rare can have their populations explode quickly when a group is found, which diminishes prices.

Buyers likely kept this in mind when considering the collection’s first lot, a Satin Finish 2009 William Henry Harrison dollar graded MS-66 that went unsold at an estimate of $1,500 to $1,600. Satin Finish Presidential dollars, found only in Uncirculated Mint sets, are rare with missing edge inscriptions. In contrast, circulation-quality Presidential dollars with the same error are very common, according to the lot description. A Harrison dollar sans edge inscription graded MS-66 brought $138.

The top prices were for rare and potentially unique (at least so far) edge variants.

That the market can absorb so many of these edge errors, including numerous expensive ones, at a single auction shows that small-sized Presidential dollar edge errors have a surprisingly strong following. ¦