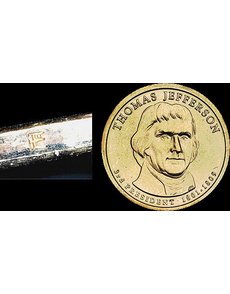 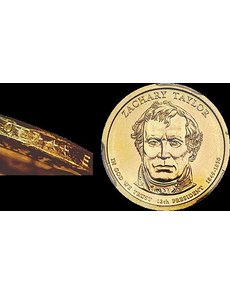 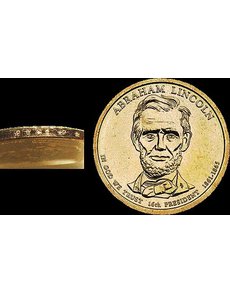 The auction comprises 4,487 lots of United States, world and ancient coins. It will be conducted at the firm’s auction gallery at 11400 W. Olympic Blvd., Suite 800, as well as online at www.goldbergcoins.com.

Among the highlights is a currently unique 2007-P Presidential, Thomas Jefferson dollar described as “Doubled Edge Lettering, Overlap, Position A.” The coin is graded PCGS Secure Plus Mint State 65.

On Evans’ Jefferson dollar, the edge inscription has the P Mint mark of the Philadelphia Mint overlapping the E of E PLURIBUS UNUM.

According to Evans, he began assembling collections of regular Presidential dollars and the corresponding First Spouse half-ounce .9999 fine gold $10 coins when both series were introduced in 2007.

With the spot price of gold escalating sharply in 2008, buying the First Spouse coins became cost prohibitive, Evans said, and he shifted his concentration solely to the Presidential dollars and edge-inscription errors.

“I was totally fascinated by the edge lettering from the beginning as I like letters and paperwork and thought it was a great novelty so I started to collect those varieties,” Evans said. “I found that I could collect more inexpensively because I could search through rolls and buy raw coins on eBay and make some great discoveries. I wanted a great challenge and a complete variety set seemed to fit the need. Gold coins, of course, can’t be found in rolls from the bank.”

Among other highlights from Evans’ collection are:

Errors in the making

The Presidential dollar coin series was inaugurated Feb. 15, 2007, with the introduction into circulation of the 2007 Presidential, George Washington dollars.

The authorizing legislation required that the date, Mint mark, motto IN GOD WE TRUST and inscription E PLURIBUS UNUM be used on the edge. Edge inscriptions were common on the earliest U.S. coinage, until they were abandoned in 1836. The concept was resurrected in 1907 on the Saint-Gaudens gold double eagles and used until 1933.

The edge inscriptions for all circulating quality Presidential dollars are imparted in a separate operation after the striking of obverse and reverse designs. At the rate of up to 1,000 coins per minute, the struck coins, sans edge inscription, are fed into a grooved edge-segment die, which forms the incuse inscriptions on the edge of each coin. The coins feed horizontally into the edge-inscription equipment randomly as to orientation of obverse and reverse relative to the orientation of the edge design.

Some edge-lettering errors are the result of coins being fed through the edge-lettering equipment more than once; because of the loosening or tightening of components in the edge inscribing process; or wear and damage to the edge segment dies.

For the Washington, John Adams, Thomas Jefferson and James Madison Presidential dollars, the coins had to be transported in bins to the edge-inscribing equipment, which was not part of the otherwise integrated production line.

Before long, 2007 Presidential dollars with edge inscription errors began appearing in general circulation and garnering the attention of collectors. Hundreds of thousands of 2007-P Washington dollars were released from the Philadelphia Mint into circulation without benefit of undergoing the edge inscription process. These coins had been taken from the coining presses directly to the bagging and counting equipment, with the edge-inscribing equipment bypassed.

Because of the missing edge inscription, which was intended to include the motto IN GOD WE TRUST, the Washington, Missing Edge Lettering coins quickly became known by some as “Godless dollars.”

The edge lettering process was integrated as the final step in a closed production system beginning with the 2008 James Monroe dollar. This integration appears to have been effective, with far fewer coins missing edge inscriptions produced since 2008.

Changes to the edge ornamentation were made in 2008 and again in 2009. An additional dot or “stop” was placed before E PLURIBUS UNUM in 2008. In 2009, the motto IN GOD WE TRUST, which appeared on the edge of 2007 and 2008 Presidential dollars, was moved to the obverse in 2009, repositioned below and left of the presidential portrait. Thirteen stars were added to balance out the edge inscription in the absence of the motto.