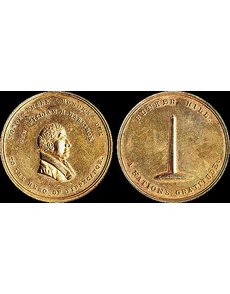 This 38-millimeter copper medal is one of many that were issued during William Henry Harrison’s campaign for president.

In New Hampshire, the presidential campaign used to start in the year of the election. That is, in 1980 the campaign started in 1980, and so on. No longer. This time the 2012 campaign started in 2010, with hopefuls poking around the Granite State and doing their best to please listeners.

This year it went into overdrive, never mind that the election is still nearly a year away. Michele Bachmann came to Concord and told listeners that it was great to be in our state capital, where the first battle of the American Revolution took place. Never mind that Concord, Mass., is what she may have had in mind.

Joe Biden, our current vice president, famously stated that during the stock market crash in 1929, President Franklin D. Roosevelt went on television to address the nation. Never mind that Herbert Hoover was president and there was no commercial television.

Time was also when presidential elections offered the chance to distribute tokens and medals proclaiming the merits of one candidate or another. The first flood of such took place in 1840 when incumbent Martin Van Buren challenged William Henry Harrison, military hero remembered for the Battle of Tippecanoe that gave Harrison his nickname. The rallying cry was “Tippecanoe and Tyler too!” Van Buren had a little problem: the financial Panic of 1837 was still being felt, and, as usual, the occupant of the White House was blamed by many. Harrison captured 234 electoral votes to his competitor’s paltry 60. Harrison caught cold the day of his inauguration, March 4, 1841, and died a month later. Vice President John Tyler took the oath of office.

As to what was the first presidential campaign medal, opinions are mixed. Some consider the undated success to the united states tokens with Washington to hold that position, but he was chosen by Congress, not by popular vote. Some Washington coat buttons are also in contention.

In 1832, a number of Andrew Jackson tokens were issued, this the year of his second campaign. If you want to learn more, track down a copy of J. Doyle DeWitt’s 1959 book, A Century of Campaign Buttons 1789-1889, or Edmund B. Sullivan’s 1981 updating of it. The “buttons” are nearly all tokens and medals.

A representative collection of presidential campaign tokens and medals would include hundreds of different varieties, an obscure one of which is shown here. Today, we have plastic buttons, but I’ve yet to see a 2012 campaign token or medal. Too bad for tradition.