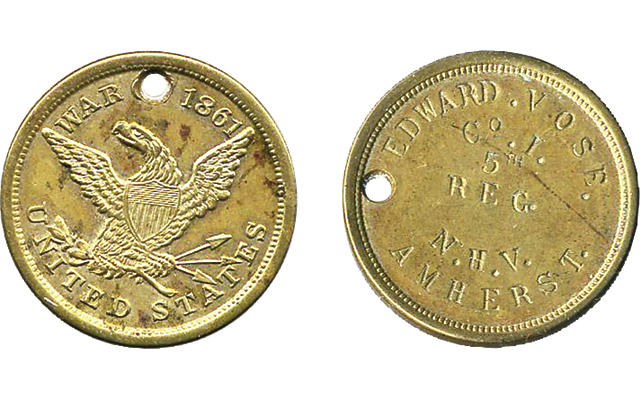 Civil War dog tag is stamped with the name of Edward Vose, a Union Army private who died from wounds received at the Battle of Fredericksburg in 1862. 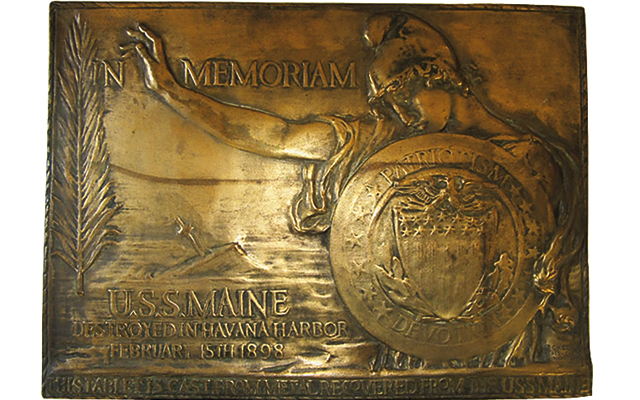 Bronze relic plaque was cast from metal recovered from the USS Maine, sunk in Havana Harbor during the Spanish-American War. 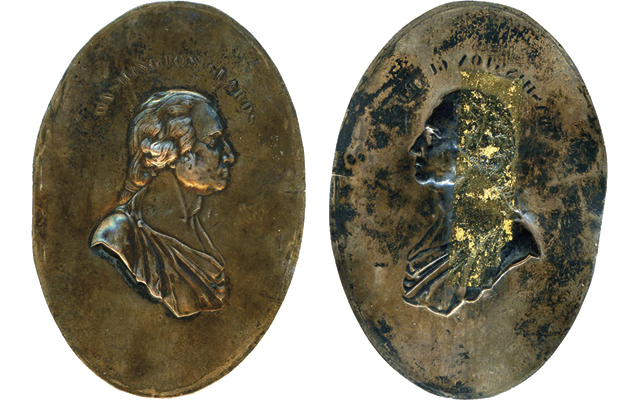 The specific reason why this Washington piece was produced is unknown. 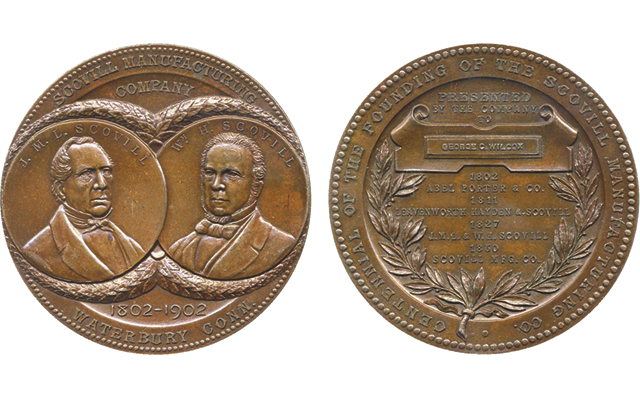 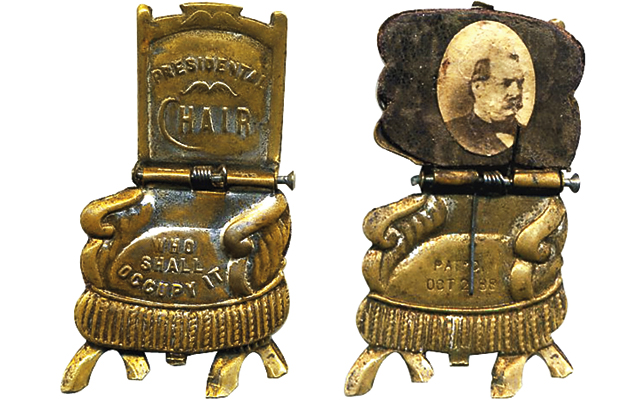 Political stickpin features an image of Grover Cleveland that is visible after the chair mechanism is unlatched.

Here’s a sampling of what the sale offers.

A 27.5-millimeter brass Civil War dog tag graded Extremely Fine and holed for suspension is marked on the back with the name of Union Pvt. Edward Vose, a member of Company I, 5th Regiment, New Hampshire Volunteers.

According to the National Park Service’s Battle Unit Details from the Civil War, Vose’s regiment sustained the greatest loss in battle of any infantry or cavalry regiment in the Union Army, with 1,051 killed or wounded. Death losses during service comprised 18 officers and 277 enlisted men killed and mortally wounded, and two officers and 176 enlisted men killed by disease.

A 12.75-inch by 17.5-inch cast bronze memorial plaque honoring the battleship USS Maine, sculptured by sculptor Charles Keck and cast by Jno. Williams Inc. of New York City, appears in the auction. It is in EF condition.

The highly sought 1913-dated plaque depicts Liberty with shield, her right arm outstretched. The battleship Maine is shown about to go under water in the background.

The plaque is cast from metal recovered from the USS Maine, destroyed in Havana Harbor, Feb. 15, 1898. The explosion, never fully explained, precipitated the Spanish American War after the United States blamed Spain for the destruction of the warship and declared war.

An undated, uniface Washington Guards oval silver portrait piece, on thin planchet, 78 by 54.5 millimeters, is available in the auction. The piece is graded Very Fine.

The lot description indicates the reason the piece was produced is unknown, but is believed to date from the mid-19th century.

This Uncirculated 76-millimeter bronze medal from 1902 celebrates the centennial of the founding of Scovill Manufacturing Co. in Waterbury, Conn.

The obverse bears the portraits of J.M.L. and William H. Scovill. The reverse design includes within a cartouche the name of George C. Wilcox, to whom the medal was presented.

Beginning in 1827 when the firm operated under the name J.M.L. & W.H. Scovill, the business was the most important manufacturer of merchant and political tokens, especially during the Hard Times period during the early to mid 19th century, according to the auction firm.

When the chair is latched in the closed position, the inscription reads, “The Presidential Chair. Who Shall Occupy It?” Once released, the seat pops up to reveal a photo of Grover Cleveland.

Each winning bid is to be reduced to 10 percent over the second highest bid. A 15 percent buyer’s fee will be added to the final closing price of each lot won.

All bidding rules by telephone, fax, email or postal mail can be located at here.