How to collect the 1912 split-ticket U.S. election 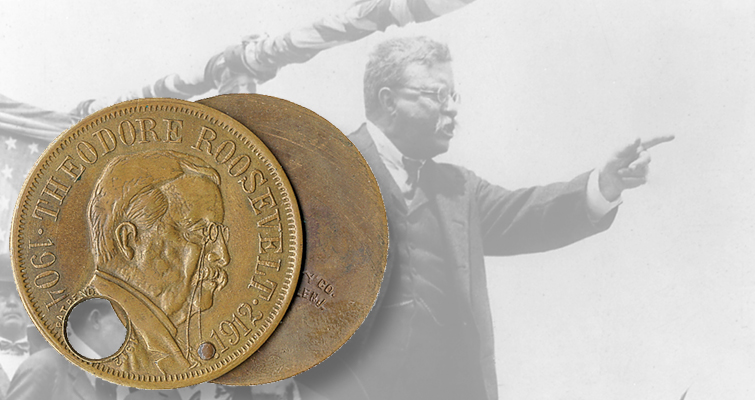 Cigar cutter featuring a portrait of former President Theodore Roosevelt is superimposed over a 1912 photo of Roosevelt as he delivers a speech during his unsuccessful campaign to return to the White House. 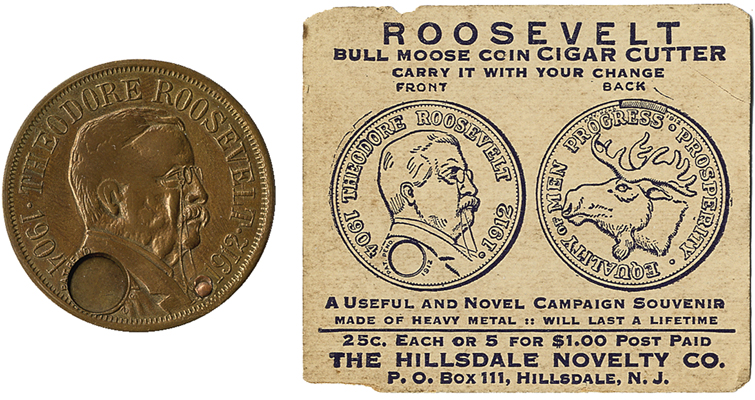 Intended to appear to be a token or medal depicting Theodore Roosevelt, this cigar cutter was produced as a 1912 Progressive Party political souvenir by The Hillsdale Novelty Co., Hillsdale, N.J. 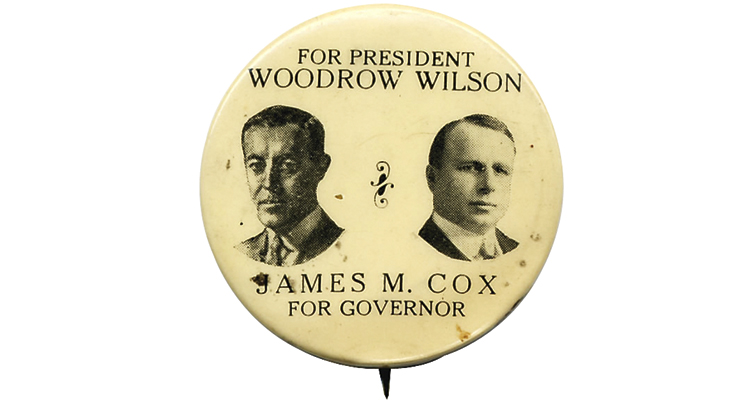 Some political items collectors consider this the "Holy Grail" of political "coattail" buttons, a difficult to find item where a candidate for, say, governor connects himself to a popular presidential candidate. This 1.5-inch piece made by the Ohio Badge Co. depicts Woodrow Wilson and James Cox, the eventual 46th and 48th governor of Ohio. The button sold for $3,220 in 2005. 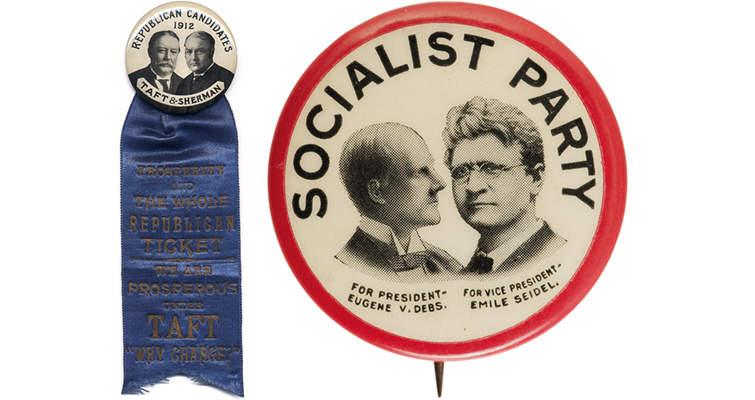 This is the fifth part of a multi-part series on Presidential campaign collectibles from the Nov. 7, 2016, monthly issue of Coin World:

Presidential campaign banners, badges, tokens, medals and more from America's 200-plus years of elections provide windows into the quadrennial campaigns and their eras. Depending upon the campaign and candidates, available items may be abundant and cost only a few dollars each, or scarce, some costing thousands of dollars regardless of condition.

For each man, a vast array of campaign items — badges, buttons, ribbons and more, all of which fall under the broad category of numismatics — were issued during the election. Some items can be obtained for less than $100 each, but some of the rarest trinkets from the campaign can cost thousands of dollars, if you are lucky enough to even find an available example.

The 1912 election witnessed the establishment of a new political entity, Roosevelt’s Progressive Party, also dubbed the Bull Moose Party. Roosevelt’s decision to seek election (he had grown dissatisfied with Taft’s policies) under a new political party banner after losing the GOP nomination served to polarize the Republican Party, eventually split the popular vote and almost single-handedly contributed to the White House being won by Wilson.

The campaign also witnessed an Oct. 14, 1912, assassination attempt on Roosevelt in Milwaukee. Roosevelt was shot by John Schrank while en route to a campaign speech, which he delivered while still bleeding from his wound. After eight days of hospitalization, Roosevelt went back to campaigning.

During his hospital stay, the other presidential candidates suspended their campaigns, as called for by Wilson. During the campaign moratorium, Taft went on a short vacation before returning to the White House, delivering several short speeches along the way. Wilson continued to govern New Jersey.

The voters made the campaign outcome final for Wilson on Election Day, Nov. 5, 1912.

Wilson became the only elected president to represent the Democratic Party between 1892 and 1932, and only the second Democrat elected between 1860 and 1932.

The 1912 election was the last presidential contest in which anyone beyond the Republican or Democratic parties was a runner-up in either the popular vote or the Electoral College. It was the first election in which 48 states of the United States participated. New Mexico became the 47th state on Jan. 6, 1912; Arizona, the 48th, on Feb. 14, 1912.

The 1912 election provided the launch pad for woman suffrage and significant contributions by women in politics; and marked the first presidential primaries. 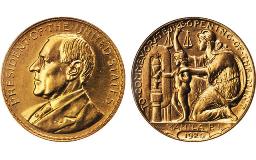 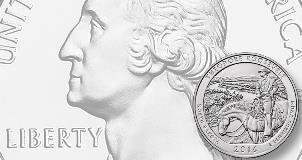