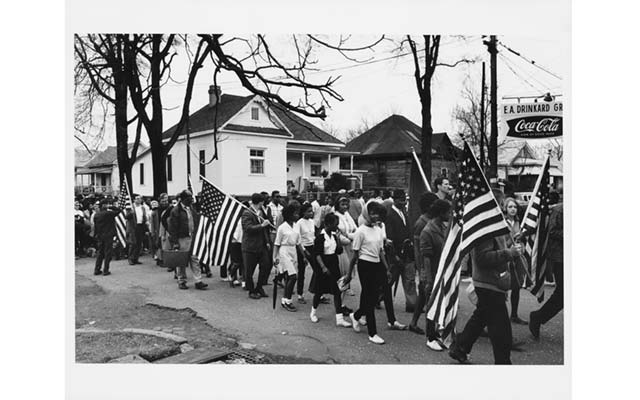 Participants marching in a civil rights march from Selma, Ala., to Montgomery, Ala., in 1965.

President Barack Obama signed a bill to award a congressional gold medal to those who marched in an event that paved the way for prohibiting racial discrimination in voting.

The bill’s full title, “A bill to award a Congressional Gold Medal to the Foot Soldiers who participated in Bloody Sunday, Turnaround Tuesday, or in the final Selma to Montgomery Voting Rights March in March of 1965, which served as a catalyst for the Voting Rights Act of 1965,” was introduced in the House of Representatives as H.R. 431 on Jan. 21 by Rep. Terri Sewell, D-Ala. The bill became Public Law 114-5 on March 7.

Two days later, “U.S. District Judge Frank M. Johnson ruled the Foot Soldiers had a First Amendment right to petition the government through peaceful protest, and ordered federal agents to provide full protection to the Foot Soldiers during the Selma to Montgomery Voting Rights March,” according to the legislation.

The bill authorizing the medal added, “On March 21, 1965, under the court order, the U.S. Army, the federalized Alabama National Guard, and countless federal agents and marshals escorted nearly 8,000 Foot Soldiers from the start of their heroic journey in Selma, Alabama to their safe arrival on the steps of the Alabama State Capitol Building on March 25, 1965.”

The secretary of the Treasury has broad discretion regarding the design of the gold medal, which is to be given to the Selma Interpretative Center in Selma, Ala.

Bronze duplicates of the medal will be made available to collectors to purchase from the U.S. Mint.