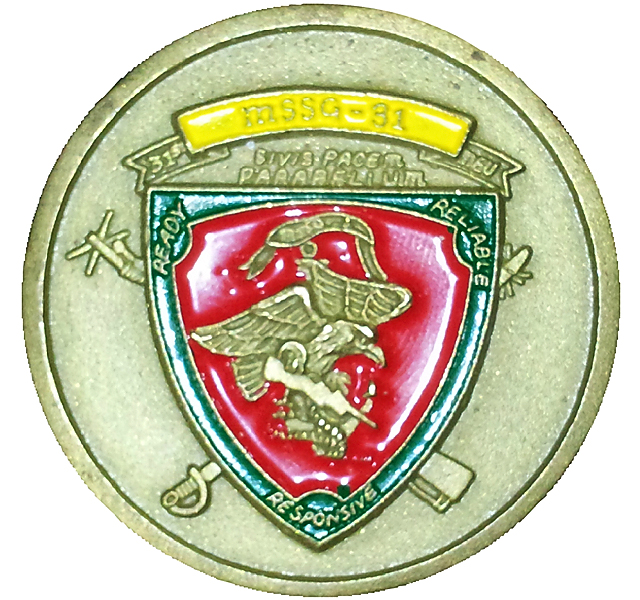 An example of a Marine Corps challenge coin

The secret handshakes are secret no more.

Photographers in the last two weeks have snapped pictures showing President Barack Obama handing challenge coins to military personnel, according to an AOL.com report on May 21.

The known ritual has long been one that presidents have sought to keep away from public images, but AP photojournalist Susan Walsh and AFP/Getty photographer Brendan Smialowski both caught Obama in the act during recent visits to Arkansas and San Diego, AOL.com’s report reads.

Military challenge coins (actually medals) date back to World War II and began as British sixpence that served to be membership tokens for a military drinking club, Michele Orzano wrote in a 2000 Coin World article.

"Years later, as military officials determined to discourage the emphasis on drinking, award coins began to surface,” Orzano wrote. "These are actually medals as they bear no denomination and have no legal tender status. Often they are presented by commanders to recognize the individual achievements of military personnel or a particular military unit.”

Photography blogger Larry Downing refers to the presidential challenge-coin handoff as a “secret handshake” in a 2012 blog post.

"Starting and ending as quickly as a bullet, the ritual is performed out in plain sight and almost always in the presence of others,” Downing wrote, noting how the exchange is done during an otherwise normal-seeming handshake. "And just like that the longstanding military tradition of giving away a 'challenge coin' is over in the blink of an eye. A small, shiny medallion riding inside the palm of one hand and seamlessly ending up in the other; similar to the practice of slipping the folded $20 dollar bill to the maitre d’ on date night.”

At least that’s how it’s supposed to go down.