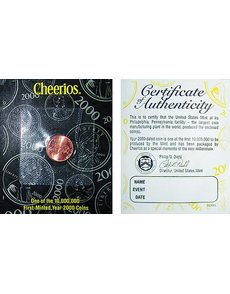 Buyers of Cheerios received an example of a 2000-P Lincoln cent in special packaging as part of a promotion by the U.S. Mint and General Mills to help launch the Sacagawea dollar coin in 2000. The dollar is extremely valuable but the cent carries a much lower premium.

I had three of the dollars but I think one of my kids spent them. I still have three cents in the Cheerios wrappers — would they be worth anything?

Rarely does someone expect to go to the grocery store and come home thousands of dollars richer, but that is what happened to a lucky group of collectors and other members of the public in 2000.

The U.S. Mint and General Mills, the producer of the cereal staple Cheerios, cooperated to promote the launch of the Sacagawea dollar in 2000 by placing 10 million Lincoln cents in specially marked packages of Cheerios, one per box, with 5,500 random boxes containing a dollar coin packaged with the cent.

The dollar is the rarer and more valuable item from that promotion, and not for the reason most members of the noncollecting public would know.

All of the dollar coins used in the promotion were struck with reverse dies produced from a model that differs slightly in design from the reverse used on the Sacagawea dollars struck for circulation and annual collector sets.

Collectors and dealers often refer to the coins used in the cereal promotion as “Cheerios dollars.”

Of the 5,500 Sacagawea dollars placed into the cereal boxes, comparatively few have appeared in the collector marketplace, and when they have, they have sold for many thousands of dollars.

The differences between the two types of the 2000-P Sacagawea dollar are subtle, affecting only the tail feathers of the eagle, and could be easily overlooked. In fact, that the “Cheerios dollars” represented a distinct variant was not widely known until 2005.

The central line of the tail-feather shaft is raised on the Sacagawea dollars found in the Cheerios packages, but recessed on coins struck for circulation.

In recent eBay transactions, unopened examples of the packaging with the cent only have sold for between $5 and $10, when factoring in shipping costs.