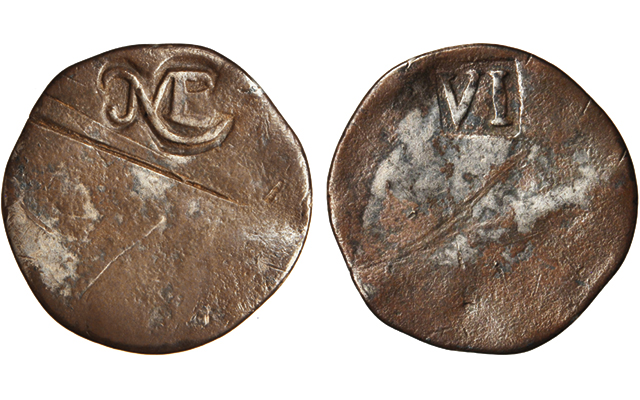 In February 1990, Lillian Rade, and her husband, Ron, were metal detecting on opposite ends of a frozen potato field in East Hampton, N.Y., on the east end of Long Island, when Lillian came across an unusual coin. East Hampton is the area of the first English settlement in the state of New York.

More than a year later, the Rades would learn from the American Numismatic Association Authentication Bureau that the coin Lillian found is the eighth known example of a 1652 New England sixpence, Noe 1-A (The Silver Coins of Massachusetts by Sydney P. Noe). Ron Rade had submitted the coin to ANAAB at the urging of a friend.

The coin was later acquired for an undisclosed sum by John “Jack” Royse through private treaty with Stack’s.

Royse consigned the potato field sixpence to the Nov. 16, 2012, Rarities Night auction by Stack’s Bowers Galleries where it was offered certified by Professional Coin Grading Service as Very Fine Details — Damage, Tooling. The piece is quickly identifiable by a large, deep diagonal scratch extending across most of the obverse, beginning at approximately the 10 o’clock position.