Population for rare die variety grows by one 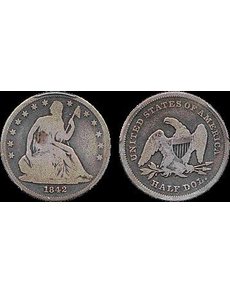 The fourth known example of the 1842 Seated Liberty, Small Date, Small Letters half dollar has been identified. The odd-looking areas at the edges of the coin are the clear grippers that hold the coin in place inside its PCGS encapsulation.

Uhrich, of Rich Uhrich Rare U.S. Coins Inc., said May 23 he had acquired his example, graded Good 6 and encapsulated by Professional Coin Grading Service, for an undisclosed “five-figure” sum from an undisclosed dealer.

Uhrich said the seller had contacted him less than a month before about the availability of the rare variety. At the time he was contacted, Uhrich said, the variety had already been certified by PCGS.

BJ Searls of PCGS confirmed that the coin was finalized in March.

For now, Uhrich said he plans on holding on to the coin.

The Small Letters reverse has small letters in the legend UNITED STATES OF AMERICA and the denomination, represented as HALF DOL. The letters are well-spaced and distant from the dentils.

A new reverse was introduced in 1842 with larger letters that more completely filled the reverse fields. The large letters are closer to each another and to the dentils.

Randy Wiley and Bill Bugert published their reference The Complete Guide to Liberty Seated Half Dollars in 1993, and speculated about the existence of the 1842 variety.

“It is entirely possible that a small date obverse could be paired with a small letter Philadelphia Mint reverse (similar to that found on all 1841 half dollars and some 1842 New Orleans Branch Mint coins),” the book authors wrote. “This combination is presently unknown and if found, would be extremely rare.”

A detailed analysis of the variety appears in the July 1998 issue of The Gobrecht Journal, published by the Liberty Seated Collectors Club. “Up until the identification of the new 1842 half dollar with small letters, it had been assumed that all 1842 half dollars struck in Philadelphia had a large letters reverse,” according to the article.

Several different Small Date dies were used in 1842 before a Medium Date style was introduced during the year. The date on the obverse of the 1842 Small Date, Small Letters half dollar slopes upward from left to right.

The reverse of the coin exhibits “several vertical lines in the reverse shield extending up in the horizontal shield stripes, with one of these lines in the last set of vertical stripes on the right extending up to the top of the shield,” according to Gobrecht Journal editor John McCloskey’s article.

The Greer discovery piece is currently in the collection of a longtime collector. It is now in a PCGS holder and is graded Very Fine 20.

Bugert located the second example of the variety in a Nov. 30, 2005, Stack’s auction where the coin was cataloged only as “Small Date” without the “Small Letters” attribution. The coin was offered as “Brilliant Uncirculated,” not yet having been graded by a third-party service.

Bugert contacted Wiley about his find in the 2005 Stack’s sale, so both could attend the auction.

According to the description for Lot 285, the coin had previously been offered as Lot 1279 in Stack’s April 1988 auction, where it was also cataloged “Small Date” and “Brilliant Uncirculated.”

The piece is currently graded Mint State 64 by PCGS.

The third example had been in the collection of dealer Dick Osburn, a Seated Liberty coin specialist.

Osburn’s example of the variety was offered by Stack’s Bowers Galleries Aug. 18, 2011, as Lot 7009 in the Rarities Night auction in conjunction with the American Numismatic Association World’s Fair of Money in Rosemont, Ill.

Cataloged as About Uncirculated Details, but certified by PCGS as “Genuine — Code 95, Scratch/Rim Dent,” Osburn’s coin did not sell at the auction.

A representative of Dick Osburn Rare Coins confirmed May 24 that Osburn had sold the coin to a collector. ¦