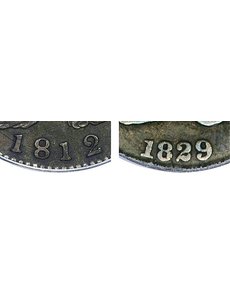 Although listed as an R-5, the 1812/1 Capped Bust, Large 8 half dollar, top, often sells at an R-6 price because it is listed in the Red Book. The 1829 Capped Bust, Curl Base 2 dime, bottom, sells for many multiples of its rarity status.

Have you ever noticed that some die marriages routinely sell for more than others with a similar population? Oftentimes, these “rogues” sell for multiples of their perceived value based on rarity ratings alone. Many times you can trace the “problem” to the “Red Book” (A Guide Book of United States Coins by R.S. Yeoman). The book features the most popular varieties for each series.

First, everyone collecting the different series has to have one of each date. This makes scarce coins like the 1822 Capped Bust dime (Rarity 4, 81 to 200 pieces), and the 1815/2 Capped Bust half dollar (Rarity 2, 500 to 1,000 pieces) much more expensive than other die marriages of the same rarity by many multiples.

If you are purchasing an R-2 half dollar of another date to fill in your Overton collection (Early Half Dollar Varieties: 1794-1836 by Al C. Overton and Donald Parsley), the demand from date collectors will be nonexistent.

The next category to examine is the overdates. Again, the Red Book lists all the popular visual overdates in each series. Album manufacturers have taken this into consideration when choosing what to include in their albums. They have included the overdates, making them mandatory to complete the collection, as they see it. Quarter dollar collectors will have to add an 1806/5 Capped Bust coin and half dollar collectors will need a multitude of overdates.

One coin that I have found to be expensive beyond its rarity is the 1812/1 Capped Bust, Large 8 half dollar. The coin is currently rated as an R-5 (31 to 80 coins known). It routinely sells for the equivalent of many R-6 (13 to 30 known) coins. The high price is because of so many collectors collecting by Red Book varieties.

Occasionally, the size of the numerals on the coin is different. The editors of the Guide Book have included some of these in their listings. Half dime collectors will need four different coins for 1835 and two for 1836 and 1837. Dime collectors will need to purchase three different 1814 and 1820 coins, two different 1821 dimes, four 1829 coins including the ever popular (and expensive) Curl Base 2, and three 1830 dimes. Other dates have multiple listings also.

The 1829 Capped Bust, Curl Base 2 dime is another of those coins selling for many multiples of its rarity status. Only one die marriage for the year is known with the Curl Base 2; all others are struck using the Square Base 2. The Curl Base 2 was not discovered until the 1970s and since then it has been downgraded to an R-5+ with slightly more than 30 pieces known. It still sells for a few thousand dollars even in low grade!

Brad Karoleff is a vice president of the John Reich Collectors Society and editor of the club’s journal. He can be reached via e-mail at bkaroleff@yahoo.com.