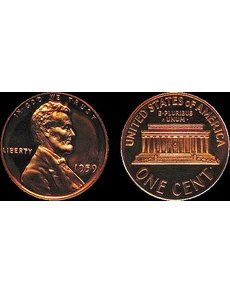 When the decision was made to change the reverse design of the Lincoln cents to depict the Lincoln Memorial beginning in 1959, journalist Jack Anderson covered the hoopla surrounding the decision.

Muckraking journalist Jack Anderson, who died in 2005, covered politics high and low, but the smallest thing he probably ever covered was the politics of the 1-cent coin.

On Dec. 27, 1958, Anderson, writing in his Washington Merry-Go-Round syndicated column, reported that the then pending redesign of the reverse of the Lincoln cent was causing fiscal problems in Washington.
He wrote, “Secy. of the Treasury [Robert B.] Anderson is irked at Mint Director Bill Brett for changing the design of Lincoln pennies. The new one-cent piece will keep the same Lincoln head but have the Lincoln Memorial on the back. Before Secy. Anderson could stop him, Brett had ordered the change to commemorate the Lincoln sesquicentennial next year.
“What annoys Anderson is the cost of switching penny designs. It will run up the Treasury Dept.’s operating expenses at a time when he is trying desperately to balance the budget.”
Almost a decade later, on May 19, 1967, Anderson reported on Mint Director Eva Adam’s testimony before the House Appropriations Committee. The bronze cent, at the time, cost about one-third of a cent to make.
Anderson reported Adams told the committee: “As l understand, a pound of material makes 145 pennies. We make about a dollar for every pound of material. For every 145 pennies, we get a dollar profit.”
Anderson’s biggest cent coup, though, was on April 21, 1975, when he reported, “It looks suspiciously as if some distinguished members of Congress may have sticky fingers.
“In late 1973, 16 rare aluminum pennies were shown around Capitol Hill. Only two of them have been returned. The rest have mysteriously disappeared.”
In the years after Adams testified, copper prices had risen to the point that the Mint was considering switching to aluminum cents.
Anderson speculated that “sticky-fingered legislators” were aware that the coins were illegal to own but knew they still had a substantial “under-the-table value …” A subsequent FBI investigation turned up two more cents.
On Aug. 26, 1978, Anderson revisited the story, reporting that “four more of the rare coins had been accounted for, leaving only eight as potential prizes for wealthy collectors.”
Three of those four cents were returned to the Mint and melted. The fourth was given to the Smithsonian Institution, where it remains today.
No one will ever know if any of the remaining missing aluminum pieces were sold on the black market.
If he were still alive, Anderson would still be on the trail.Gerald Tebben is editor of the Central States Numismatic Society’s Centinel.