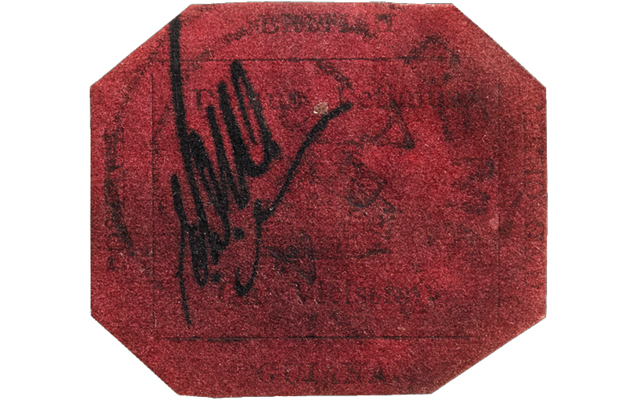 The 1856 British Guiana 1-cent black-on-magenta stamp has been described as the most valuable stamp in the world. It brought $9.5 million at a June 17 auction. What’s the upper-limit for the rare coin market?

If the world’s rarest stamp sells at auction for $9.5 million, what’s the limit for a rare coin?

The absolute upper limit of the rare stamp market was tested on June 17 when Sotheby’s sold an 1856 British Guiana 1-cent black-on-magenta stamp. It’s been described as the world’s most famous stamp, the “pinnacle of philately” and carried an incredibly optimistic upper estimate of $20 million.

Currently, the record price at auction for a rare coin is just over $10 million, achieved last year for a high-grade 1794 Flowing Hair silver dollar with a silver plug. The previous record was set in 2002 when a bidder paid $7.59 million for a 1933 Saint-Gaudens gold $20 double eagle.

What’s the top price that a rare coin could sell for today?

The market may find out in the next few years as the Pogue family collection is set to be sold by Stack’s Bowers Galleries starting in 2015.

Two coins are especially exciting. First is the Walter H. Childs Class I 1804 dollar, graded Proof 68 by Professional Coin Grading Service which brought a then-record setting $4.14 million when Childs’ collection was sold at an Aug. 30, 1999, Bowers and Merena auction. It’s the finest known 1804 dollar, a legendary rarity in American numismatics that has recognition beyond coin collectors.

If the world’s richest collectors want one of the most coveted gold rarities, the Pogue collection has an 1822 Capped Head gold $5 half eagle. It’s one of three known and the only one privately held. The other two are in the National Numismatic Collection at the Smithsonian Institution.

PCGS includes both of these coins in its list of the 10 most valuable coins, with estimated market values of $7.5 million and $6 million respectively.

As buyers from around the world seek alternative assets, rare U.S. coins — especially excruciatingly rare ones — seem to provide good values, even at seven-figure prices.

At $10 million, the price of the very absolute top coins and stamps, one couldn’t reach the top of the Impressionist, Modern or Contemporary market. In Christie’s and Sotheby’s recent May Impressionist and Contemporary auctions in New York City, at least 44 works each sold for more than $10 million.

Ten million doesn’t buy as much as it used to in some collecting areas, but in the rare coin market, a new $10 million buyer could have a dramatic impact on the entire market. Or, he or she could buy a single absolutely extraordinary coin.