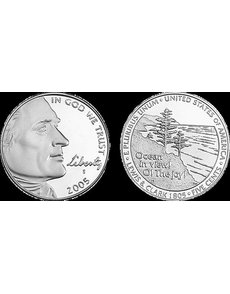 This 2005-S Jefferson, Ocean in View 5-cent coin has a misspelled word in the reverse inscription. Can you find it?

It is interesting to contemplate the coins in everyday pocket change. I’ll start a little mini-series on this, going back to Colonial days. To set the theme I discuss the situation today.

Lincoln cents abound, most of them dated 1982 or later and made of copper-plated zinc. While the cent has little buying power on its own, it has extensive use in making change. Now as in the 19th and 20th centuries, many goods are priced ending in 99 cents, such as $4.99 or some other odd amount such as $3.88. When a $5 bill or other paper money is tendered in payment, cents are needed to make change. We all call them “pennies,” of course — dating from the British penny.

The U.S. Mint has always used CENT on its coins, but a brochure given out at the Denver Mint some years ago was titled “How to Make a Penny,” and in their speeches Mint directors nearly always say “pennies.” The mega-event in the annals of Lincoln cents was the introduction of four different reverse designs in 2009, but the coins circulated erratically, and it was well into 2010 before I saw even one in circulation.

Five-cent pieces, called “nickels” (although they are 75 percent copper and 25 percent nickel) are seen here, there, and everywhere, including new designs introduced beginning in 2004. My favorite is the Ocean in View coin of 2005, the name of which includes a misspelling. Do you know what it is? The term is taken from an entry in the Lewis and Clark Expedition journals which have it as “ocian in view.” Thus the coin should have been lettered “Ocian.” I asked the Mint director about this and was told, “I know it is wrong, but if we had given it correctly everyone would think we made a mistake!” I guess this makes sense. Or does it?

As to the Roosevelt dime, “Same old, same old” applies. No change since 1946, except for the alloy in 1965, which didn’t change its look.

Washington quarter dollars are the coins of the realm today. Vending machines, toll booths, and other devices accept them. I love the State quarter dollars and am gaining familiarity with the America the Beautiful coins (which do not seem to have ignited much public passion). No matter, we need quarter dollars every time we make a small purchase.

Kennedy half dollars? I haven’t received one in change in 30 years! Anthony, Sacagawea and, now, Native American and Presidential dollars — ditto.