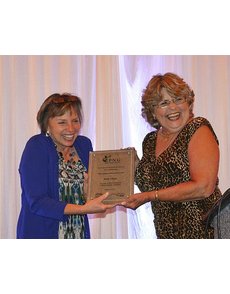 Eloise Ullman, who is retiring soon as executive director of the Industry Council for Tangible Assets, is the 2013 recipient of the Professional Numismatists Guild’s Lifetime Achievement Award in recognition of her years of dedicated service and achievements in numismatics.

The award was presented Aug. 12 in Rosemont, Ill., at the PNG Day banquet on the eve of the American Numismatic Association World’s Fair of Money.

The award was presented to Ullman by Diane Piret, ICTA industry affairs director and a PNG associate member.

Ullman has provided the numismatic hobby and profession with 23 years of service as ICTA executive director. PNG recognized Ullman for her tireless efforts on legislative and tax issues facing dealers and collectors across the country.

Piret was honored with the PNG’s Significant Contribution Award for her 40 years of dedication and significant contributions to numismatics.

The 2013 Sol Kaplan Award for helping to rid the profession of fraud and thievery was presented to New Jersey dealer John Albanese. Albanese is a co-founder of both Numismatic Guaranty Corp. and Professional Coin Grading Service. In 2005, he founded the nonprofit Numismatic Consumer Alliance, which has helped recover millions of dollars for buyers who were the victims of unscrupulous coin merchants.

The Abe Kosoff Founders Award, named after the PNG’s founding president, was presented to Illinois dealer and PNG board member James A. Simek for his enthusiastic leadership and steadfast dedication to the entire numismatic community.

The Robert Friedberg Award, for an outstanding book or other literature, was presented to Ronachai Krisadaolarn and Vasilijs Mihailovs, co-authors of Siamese Coins — From Funan to the Fifth Reign, published by River Books Co., Ltd. of Bangkok, Thailand.

The Art Kagin Ambassador Award was given to long-time Pennsylvania dealer Catherine Bullowa. Named after a former PNG president, the Kagin Award is given for distinguished service as an advocate of numismatic goodwill.

The Outstanding Service Award went to Oklahoma dealer Paul Montgomery for his 14 years of distinguished service to PNG on the board of directors, including two years as president.

For additional information about the PNG, visit www.PNGdealers.com. ¦