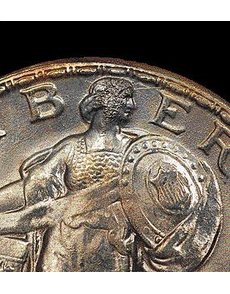 The Professional Numismatists Guild failed to come to a consensus on what constitutes “coin doctoring,” which would address issues such as the altered head of the Standing Liberty quarter dollar shown.

A revised draft on “coin doctoring” submitted to the Professional Numismatists Guild by a select committee tasked to author an updated definition, failed to gain the approval of the PNG’s membership at a meeting held in January at the Florida United Numismatists convention in Orlando.

The draft submitted to the PNG (which can be viewed online at www.coindoctordefinition.com/?page_id=123) is divided into two sections, with the first section dealing with “Deceptive Surface Manipulation” and the second section addressing “Conservation.”

In response to a Coin World query about the January proceedings, PNG President Jeffrey Bernberg said in an email, “The 17 member committee, after hundreds of hours of work, came to the conclusion that it had become impossible to delineate each and every thing that could be done to coins and be considered ‘doctoring’. Rather [than] listing what is [permissible] to do to coins, it is their intention to limit what cannot be done and basically go after intent, which covers all types of fraudulent alterations. It is the committee’s expectation to get back to the PNG board within the next 30 days. Additionally, there is some ‘new blood’ that has been asked to join the committee and one member has resigned.”

In its entirety, the draft states:

“The coin collecting hobby and the industry that supports it have found it necessary to review and revise their standards many times. Throughout each era, price increases and/or price spreads have created a demand for more rigorous definitions as to what the market finds acceptable, and what it does not. In recent years, the PNG has worked in concert with NGC, PCGS, CAC and other industry leaders, to identify and define both acceptable and unacceptable practices for coin preservation and conservation. Acceptable practices aim at preservation and the conservation of previously damaged or manipulated coin surfaces. The most recent steps in the evolutionary process of coin evaluation have resulted in a more rigorous codification and enforcement of standards.

“Additionally, there is a need to address practices and behaviors that are viewed as unacceptable, which affect the surfaces of coins in any way that deceptively alters the perception of the coin, in order to gain grade, designation or value enhancement. It is unethical and possibly illegal to use techniques and/or treatments to deceptively simulate or artificially enhance the qualities of coins so that they might appear to have higher technical grades and or more market-acceptable qualities than are naturally and/or otherwise present.

“PNG also recognizes that there is confusion regarding what preservation and conservation techniques are considered acceptable. We will attempt to identify, define and/or describe what is clearly classifiable as intended to deceive. Note, the definition below is not intended for application on ancient issues and paper money, as these require their own specific definitions.

“1) Mechanical disruption of surface metal (including, but not limited to, puncture or cut surfaces; plug or otherwise repair surface marks or damage; polish, whizzing or laser of surfaces).

“3) Application of exogenous materials to increase apparent mint luster, infer less wear, reduce evidence of prior manipulations or cleanings, replace missing details or earn a grade designation (including, but not limited to, application of solder; introduction of glue, plastic or other bonding agents; application of waxes, putties, powders or assorted grease or gels; exposure to dulling agents; addition of PVC; exposure to smoke or other gases).

“4) Abrasive cleaning such as, but not limited to, the use of erasers or cleaning pads.

“5) Copper/bronze coins are made from the most reactive of coinage metals. They are far more vulnerable to the production of artificial color, typically resulting in, but not limited to, various hues of red, blue and purple. Some conservation techniques safe for coinage produced in nickel, silver and gold consistently produce unacceptable results on copper/bronze. Artificial color may be achieved by exposure to agents that may or may not be acceptable for use on other coinage metals (including, but not limited to, arsenic; thiourea-based compounds; dilute acids; ammonia; chlorine and caustic solutions).

“6) Artificial toning is the intentional, and/or inappropriate, accelerated acquisition of surface patina, primarily used to mask impairments on surfaces and/or to increase subjective eye appeal and/or grade. Artificial toning is always prohibited, and may result from intentional or inappropriate exposure to various substances or effects (including, but not limited to, direct heat; electrical current; immersion in certain liquids including bleach and/or others; exposure to gases; intentional or inappropriate storage conditions). It may be facilitated through the introduction of various compounds or catalysts including, but not limited to, sulfur, antimony, phosphorous, iodine, various alkanes, caustic compounds and acids.

“Conservation of coinage may include, but is not limited to, the removal of loosely adhered surface contaminants or incidental oils or grease; removal of prior, intentionally applied coatings; and the removal of harmful surface contaminants, with subsequent stabilization of the underlying metal. Additionally, the historically accepted procedure of dipping coins in dilute acids to remove unattractive toning may in some cases be considered conservation. The goals of such conservation steps are to stabilize the surface of any treated coin, as well as to bring the coin within current market standards of acceptability. In all cases, conservation should be performed by skilled, well-trained technicians as even very minor mishandling can cause permanent and irreparable damage to a coin’s surface.

“Methods of conservation that are considered acceptable by the PNG-

“2) Use of rose thorn or similar device to remove carbon or particles without exposure of underlying raw metal.

In July 2010, the PNG announced the adoption of a formal definition of what constituted coin doctoring. It stated: “Coin doctoring is the action of a person, or the enabling of another, to alter a coin’s surface or appearance, usually to diminish or conceal defects, and thereby represent the condition or value of a coin as being superior to its actual condition or value. Among the practices defined as doctoring are effacing hairlines by polishing or manipulating the surfaces of proof coins, applying substances to the surface of coins to hide marks and defects, hiding marks or otherwise changing the appearance of a coin by adding toning, adding chemicals or otherwise manipulating the surfaces to create ‘cameo’ frost on the devices of proof coins, and making a coin appear more fully struck by re-engraving portions of the devices, such as re-engraving bands on the reverse of a Mercury Dime or adding head detail to a Standing Liberty Quarter. Altering dates or mintmarks or other struck portions of a coin to make it appear to be from a mint date or type other than that of origin, and altering business strike coins to make them resemble proof issues are also examples of coin doctoring. This definition is not intended to be all-inclusive, but only illustrative of forms of coin doctoring.”

However, at the January 2011 Florida United Numismatists convention in Tampa, PNG members voted 45 to 2 to remove this expanded coin doctoring definition.

The PNG’s current definition of coin doctoring is encompassed by a one-sentence statement, found in Section 7 of the PNG’s Code of Ethics, in which a coin dealer pledges “To refrain from knowingly dealing in counterfeit, altered or repaired numismatic items without fully disclosing their status to my customer.”

A committee was formed in August 2011, headed by Certified Acceptance Corp. President John Albanese, to draft an updated definition of coin doctoring, which resulted in the draft rejected by PNG members at the 2012 FUN convention.

Attempts to contact Albanese regarding the most recent developments were unsuccessful as this issue of Coin World went to press.

For more about the Professional Numismatists Guild, contact the PNG by mail at 28441 Rancho California Road, Suite 106, Temecula, CA 92590, visit the PNG’s website at www.pngdealers.com or email the PNG at info@pngdealers.com. ¦