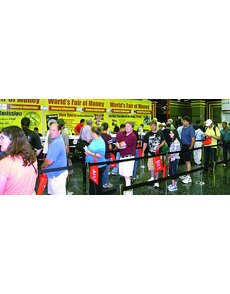 And still they come! A crowd of registrants wait patiently in line Aug. 20 on the last day of the American Numismatic Association World’s Fair of Money at the Donald E. Stephens Convention Center in Rosemont, Ill.

In mid-August I attended the American Numismatic Association World’s Fair of Money, the designation for what used to be called the ANA convention. Held each summer, the convention is often the focal-point show of the year.

The number of different people attending a given show is the numismatic equivalent of a state secret. Bigger is better seems to be the guiding rule. Insiders know that this is not necessarily so. As an example, the yearly gathering of the Early American Coppers group, with several hundred signing up, is one of the most enjoyable and active of the year.

The old-time rule for ANA conventions was to count the number who registered. Seems the right way to do it. Then, a few decades ago the system became casual.

Today it is a question in history as to whether more than 20,000 different people attended the summer shows in 1976 and 2000, both of which posted these numbers. Ed Rochette, former executive director, said that for some shows the number of “people days” was used. Under the “people days” method of counting attendance, if I attended a convention from Tuesday through Saturday, or five days, I counted as five admissions. This paled into insignificance compared to a West Coast show that counted people as they walked in — so if a smoker came in and out six times in a single day, he or she was tallied as six people for that day alone!

Changing the drift slightly, we have population reports issued by Professional Coin Grading Service and Numismatic Guaranty Corp. These do not reflect true population at all — for that would mean the number of different coins certified. Instead, these are certification events.

In one instance a leading dealer told me he sent in a 1916-D Winged Liberty Head dime 24 times, on his own and through friends, until finally it was graded Mint State 65. Each submission would be counted in the grading service’s population report, and yet, just one coin was involved.

Many general-interest magazines faced with declining subscribers now offer special deals — such as buy one subscription for yourself and another free as a gift for a friend. This keeps the numbers high, but the quality of the subscribers suffers.

“To make something seem official, attach a number to it,” is a truism. If I said that 2,453,509 people read my books and articles on the Internet last year, few would question it!

The ANA is back on track — and will publish actual registration numbers, an ANA official told me.