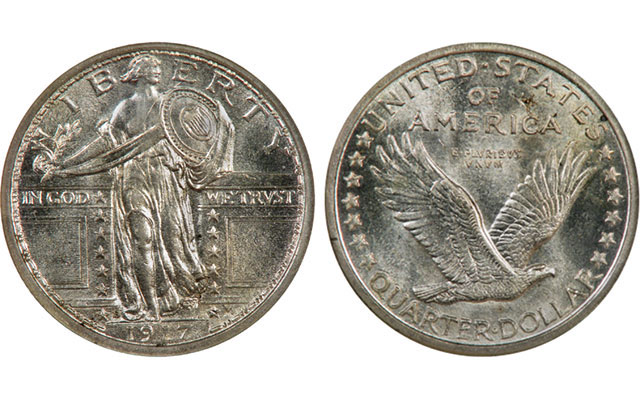 This rare error 1917-S Standing Liberty quarter dollar has a hole in that is a result of a planchet flaw. 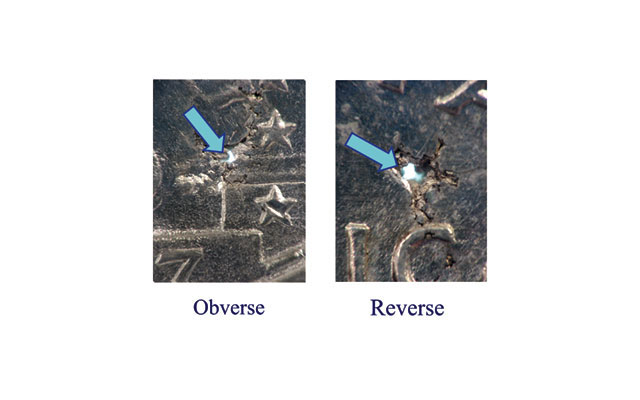 This rare error 1917-S Standing Liberty quarter dollar has a hole in that is a result of a planchet flaw.

You would think that after specializing in any given series of U.S. coins for 40-some years, a person would have seen or heard just about everything!

I have specialized in Standing Liberty quarters since my first book came out in 1976, and I have updated and revised that book three times, with the Standing Liberty Quarters fourth edition (the current edition) published and copyrighted in 2007.

But, at the Whitman Baltimore Expo this past spring, a man brought a Standing Liberty quarter dollar to my table — a 1917-S Type 1, with a hole in it.

No, not a drilled or punched hole, but a missing metal hole. The hole is from a flaw in the blank strip used to make the planchets. Holes like this are usually the result of metal flakes in the casting of the silver, since the coin’s composition is only .900 fine silver.

Possibly slag or sand or some other debris could have been present, and the pressure from striking the planchet into a coin shattered the impurity, resulting in the hole.

Since this hole is small and irregular, a gap must have occurred in the bar stock where the foreign slag or sand was located when the bar of silver was cast.

The hole is at Miss Liberty’s left foot, viewed from the obverse, or above the C in AMERICA viewed from the reverse. A person can see light through it when it’s illuminated from behind.

This is surely a dramatic error and seldom seen in modern-day minting of silver coins. There must be other holed coins out there, but none that I am aware of in the Standing Liberty quarter dollar series.

A few broken planchets exist that occurred during striking, and I own one of the only four Standing Liberty quarter broken planchets known. It is a 1919 coin, graded About Uncirculated 58 by Professional Coin Grading Service, and encapsulated in two separate PCGS holders.

I have also seen a silver dollar broken planchet piece.

Tom Mulvaney took the photos of this Standing Liberty quarter planchet flaw, which appear on our website. He did a great job — his photos show the detail of the irregularity of the shape so clearly!

NGC has told me that this piece was encapsulated at least 10 years ago. I wonder, and I think you might, too, where it has been hiding for the last 97 years.

Quality control was generally excellent during the time when Standing Liberty quarters were minted. Two women would sit, one on each side, at a conveyor belt that had new strikes on it, and would pick out any defective pieces and toss them back into the melting hopper, in with the punched strip and other silver scrap and shavings that resulted from the striking process.

Since the nature of this piece as an error only surfaced this spring after being certified for more than 10 years, I consigned it to Heritage’s auction at the 2014 American Numismatic Association World’s Fair of Money in Rosemont, Ill. I just wanted to stir up interest.

There were many viewers — 166 — but no serious buyers. I am sure this is due to the lack of any pricing guidelines for a unique piece such as this. I have since added it to my collection, but still might be tempted to sell it at some time in the future. However, again, it is very difficult to determine a price that would be fair.

All Standing Liberty quarter dollar errors are rare, and this coin is very rare. I sincerely hope you enjoy the opportunity to see this rare beauty at least half as much as I do.