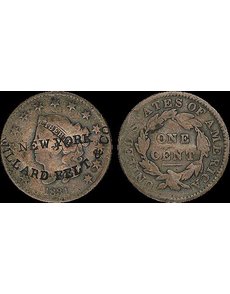 Willard Felt was a wheelwright and blacksmith in East Milton, Mass.

According to tradition, he forged the first iron “shoes” or plates to face the wooden rails of the Granite Railway, America’s first railroad, constructed between 1825 and 1826 to provide stone for the Bunker Hill monument.

According to the N.H. Felt Family Association, Willard Felt also constructed the first railroad cars for this Granite Railway, and some of these remained in service until the road rights were sold in 1870.

In 1831 Felt abandoned the physical trades in which he had distinguished himself, and moved his young family into Boston proper, where he took up the stationery trade at 82 State St.

Two years later, he sold the shop to an employee and followed his brother, David Felt, to New York City.

David Felt’s firm established a factory in Brooklyn in 1839, and David removed to there in 1842 to run the manufacturing plant.

The stationery store occupied several other premises before Willard Felt retired from the stationery and printing business in 1859 with a net worth estimated at $1 million, a big pot in those pre-Civil War days. He left his son, Willard L. Felt, in charge.

The firm did a good deal of business in stationery, school and cleaning supplies with the New York City public schools.

The son expanded the business. In 1860, Willard Felt & Co. opened a New Orleans branch, but storm clouds were on the horizon. Louisiana seceded in 1861, and the elder Willard Felt died March 2, 1862. Both branches survived into at least the 1870s.

At the time, this piece was listed in neither counterstamped coin nor merchant token catalogs.

I believe the 1831 date on the circulated cent was meant to commemorate Willard Felt’s change of careers in that year from physical labor to retail enterprise.

Today Felt’s stone cottage in East Milton, Mass., where he engaged in blacksmithing those many years ago, is preserved as a historic site.