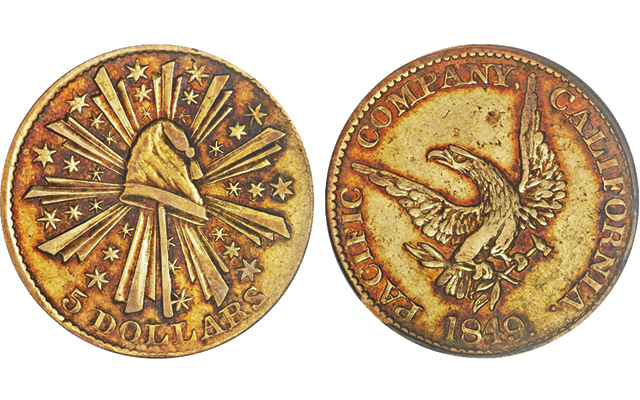 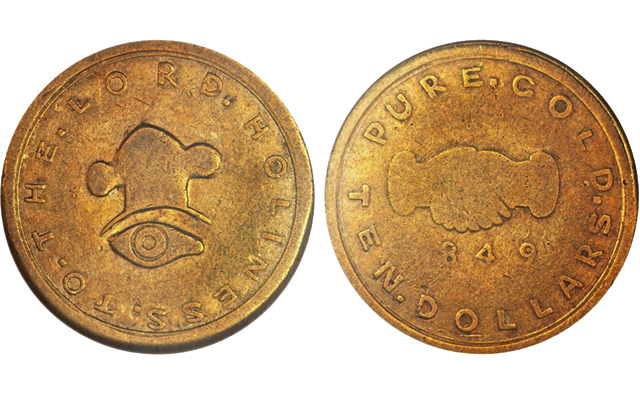 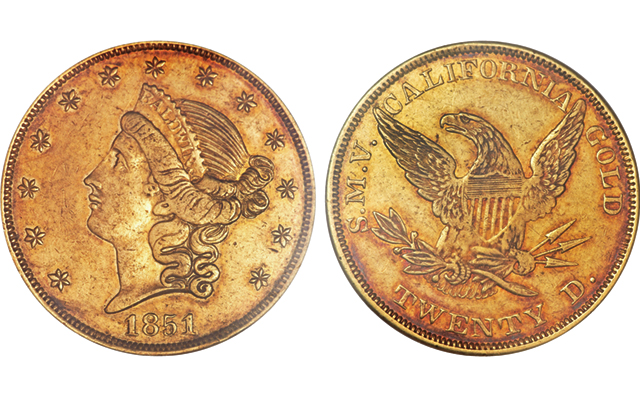 Only four examples have been traced for the 1851 Baldwin & Co. $20 pioneer gold coin. The finest known example, shown, graded PCGS Extremely Fine 45, brought $646,250 at auction April 24. It was once part of the famed Garrett Collection. 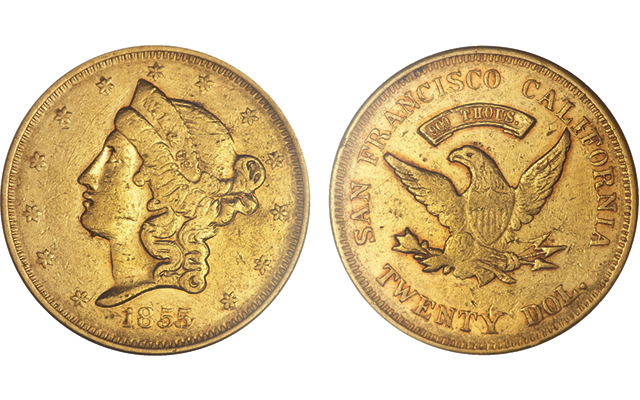 Believed to be a unique variety and unlisted in Private Gold Coins and Patterns of the United States by Donald Kagin, this NGC AU-53 1855 Wass, Molitor & Co., Large Head $20 gold piece, realized $558,125.

The April 24 sale by Heritage Auctions of the Riverboat Collection of pioneer gold coins was like old-home week for California numismatist Donald H. Kagin.

The collection sold during Heritage’s Platinum Night session conducted in conjunction with the Central States Numismatic Society’s 75th Anniversary Convention in Schaumburg, Ill. Kagin, a pioneer gold specialist, has owned or handled several of the coins he re-acquired as many as four times each in his 40-year career.

Kagin is owner of Kagin’s in Tiburon, Calif. He is also author of the 1981 reference Private Gold Coins and Patterns of the United States and is planning on publishing a second edition of the tome, for release in 2015, incorporating color images of the coins from the Riverboat Collection.

The collection, comprising 62 pioneer gold coins and one gold pattern, brought total prices realized of $10,489,762. All were sold without reserves, and the prices realized include the 17.5 percent buyer’s fee added to the final closing hammer price of each lot won.

Massachusetts dealer Stuart Levine assisted the unidentified consignor of the Riverboat Collection in assembling the collection over some 25 years.

Levine said the cataloging by Heritage includes extensive pedigree information that will aid pioneer gold enthusiasts and researchers in the future.

Although some of the pioneer gold coins have not been offered at auction in decades, they may have traded hands one or more times in private transactions since  their previous public offering.

According to the firm’s April 30 press release, its April 24 Platinum Night brought more than $30 million and in total, the U.S. coin auctions at CSNS realized more than $46.7 million.

Kagin’s acquisitions account for nearly half of the total dollar value realized from the Riverboat Collection.

Some of the coins he acquired were purchased directly for placement in clients’ collections, while others were obtained for inventory.

Kagin added, “We have a dozen very happy clients.”

The top four coins Kagin acquired from the Riverboat Collection, based on rarity, condition, price and overall appeal, according to Kagin, are:

? 1849 Pacific Company gold $5 coin, cataloged in the 1981 book as Kagin 1, Professional Coin Grading Service About Uncirculated 58, $763,750. The coin last sold at auction March 1, 1980, by Bowers & Ruddy for $180,000, when it was offered uncertified, with a grade identified by the auction firm as Very Fine 30. David J. McCarthy, senior numismatist and researcher at Kagin’s, said April 28 the Pacific $5 piece should have easily been a $1 million coin.

The PCGS AU-58 1849 Pacific Company gold $5 coin, once part of the Garrett Collection, is the finest of just four examples known.

Little is known of the Pacific Company gold $5 coins, or of their $1 and $10 counterparts.

Kagin identifies in his book four companies associated with the California Gold Rush that employed Pacific in their official corporate name.

The most likely candidate for the firm that devised a coinage plan and created dies for this coinage is the Pacific Company formed on Jan. 8, 1849, by Boston merchant John W. Cartwright.

Kagin said April 28, 2014, that he has now owned or handled the PCGS AU-58 1849 Pacific Company $5 coin four times in his career. The first acquisition was in 1980 when he placed the winning bid at the Garrett Collection sale; he eventually afterward placed the coin in a private collection.

Kagin said he currently did not have a buyer for the coin.

Known by fewer than a dozen confirmed extant examples, the NGC AU-58 1849 Mormon $10 coin is the finest known among those examples.

The Latter-Day Saints, commonly known as the Mormons, established the Deseret Assay Office in what is now known as Salt Lake City, Utah. Gold coins were struck from gold dust retrieved from the California gold fields.

Kagin writes in his book that 25 of the Mormon gold $10 coins were struck on Dec. 12, 1848. Mormon leader Brigham Young received 20 of the first strikes, with the other five going to English-born metalworker John Moburn Kay, who contributed to the designs of the coins and executed their actual production.

Noted by Kagin as the first pioneer gold coins struck from California gold, a Mormon $10 piece is key to a set of pioneer gold. Examples appear for sale only once every decade, according to Kagin, who has handled or owned this particular coin four times.

The coin was purchased on behalf of a client.

Only four examples of the 1851 Baldwin gold $20 coin have been confirmed extant, with the coin Kagin acquired from the Riverboat Collection being one of two in private hands. This piece was once part of the Garrett Collection.

The 1851 Baldwin & Co. $20 piece was struck by a jewelry and watchmaking firm owned by George C. Baldwin and Thomas S. Holman in San Francisco.

The business partners purchased F.D. Kohler and Co.’s coining operation on March 15, 1850, and struck gold $5, $10 and $20 coins until April 1851. Albert Kuner is credited with engraving the coinage dies.

The coin first appeared at public auction in April 1924 in Henry Chapman’s sale of the Arthur Nygren Collection.

While Kagin says he has previously owned or handled two other Baldwin $20 coins a combined three times, his ownership of the example from the Riverboat Collection is the first time for this particular piece.

Kagin has handled an example before, but not the one from the Riverboat Collection until this purchase.