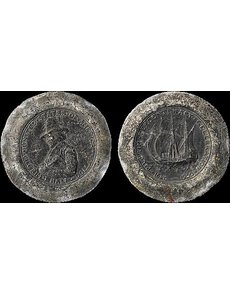 Obverse and reverse lead die trials for the 1920 Pilgrim Tercentenary half dollar that are pedigreed to the designer, Cyrus E. Dallin, have been consigned for auction in November in Baltimore by Stack’s Bowers Galleries.

A pair of uniface lead obverse and reverse die trials for the 1920 Pilgrim Tercentenary half dollar that have been in the family of the coin’s designer, sculptor Cyrus E. Dallin, for more than nine decades, will cross the auction block in November.

The die trials, Judd A1920-1 and Judd A1920-2 (as cataloged in United States Pattern Coins, Experimental & Trial Pieces by J. Hewitt Judd, edited by Q. David Bowers), have been certified Mint State 61 by Professional Coin Grading Service. They will be offered for sale by Stack’s Bowers Galleries during the firm’s Nov. 16 to 19 auction held in conjunction with the Whitman Coin & Collectibles Expo in Baltimore.

Struck from the original completed dies for 1920, the lead die trials measure approximately 52 millimeters in diameter, with the coin designs taking up 30.6 millimeters of the space, the diameter of a struck half dollar.

According to Stack’s Bowers cataloger Frank Van Valen, the only previous sale of a Pilgrim die trial was in 2002, where a reverse trial in lead brought $10,000; at the time it was considered unique.

The lead die trials have been consigned to the Stack’s Bowers auction by Dallin’s great-grandson.

Dallin the sculptor, from Arlington, Mass., was commissioned by the Massachusetts Tercentenary Commission to execute models for a commemorative half dollar showing depictions of Plymouth Colony, Gov. William Bradford, and the Mayflower, on which the Pilgrims made their historic voyage in 1620.

According to Van Valen, Dallin’s great-grandson has contributed a number of medals and memorabilia to the Cyrus E. Dallin Art Museum in Arlington – the Massachusetts city where the sculptor plied his trade for more than 40 years.

Dallin was a colleague of sculptor Augustus Saint-Gaudens. Dallin’s sculptures number more than 260 works, including Paul Revere and Appeal to the Great Spirit.

For more information on the die trials and the complete sale, visit www.stacksbowers.com. ¦