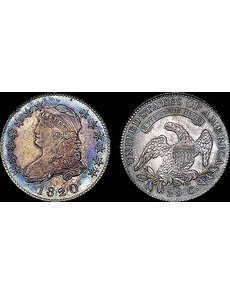 Although NGC has certified this 1820 Capped Bust, Large O quarter dollar as grading Mint State 64, when offered in 1988 by Auctions by Bowers and Merena as part of the Norweb Collection, it was described as a “one-sided proof.”

In the Aug. 20 installment of this column, I initiated discussion on the mystery surrounding what researcher/author Walter Breen noted in his Encyclopedia of U.S. and Colonial Proof Coins as a “one-sided proof.” Breen defined a “one-sided proof” as: “A coin minted by normal proofing process except that the reverse die remained unpolished.”

I believe that many early coins certified as “Proofs” should be called “presentation pieces.”

First, “Proofs” were not planned as a yearly issuance in the early 19th century as they are today. They were produced on an “as needed” basis. I envision the following situation as being a reason for their issuance. Perhaps the Mint was hosting an important visitor and a government official wanted to present the visitor with a gift commemorating his attendance. The call would go out to the workshop to polish up a few dies that were on the shelf being used for general production. They would also polish the planchets they were going to use for these strikes in order to provide the best examples possible for inclusion in the presentation set.

The press operators would then give the screw press an enthusiastic strike to make sure the design was imparted to the coin in the most complete manner. Breen suggested that “2 to 4 blows from the dies in a screw press can usually be demonstrated. ...”

In either case, the polished dies and planchets would produce a “special” coin no matter how many blows the operators would impart with the press.

Now that the presentation strikes were finished what would the workers do with the polished dies? They did not relegate them to the back shelf or destroy them, as dies were a valuable asset. The most expensive part of the minting process was the production of working dies. The Mint would have continued to use these dies for circulation-strike production.

The dies may have been mated with their former “Proof” partner die or with another random unpolished circulation-strike die, producing what we now refer to a one-sided Proof.

Some coins exhibiting prooflike surfaces on both sides of the coin are not presentation pieces but are the result of these “proof dies” being mated in the press using normal planchets for coin production. Collectors should exhibit caution as some of these have been offered as “Proofs.”

Therefore, the mystery of the one-sided Proof may be solved, or perhaps other researchers may disagree and we have another situation similar to the E and L counterstamped quarter dollars that may not ever be resolved.

Brad Karoleff is a vice president of the John Reich Collectors Society and editor of the club’s journal. He can be reached via e-mail at bkaroleff@yahoo.com.