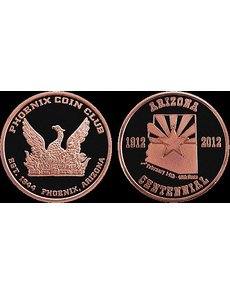 The Phoenix Coin Club is offering three different medals commemorating the 100th anniversary of Arizona’s admission to the Union. Shown is an example of the club’s Proof copper medal.

The copper medals were struck from copper mined in Arizona, according to the club.

The shared obverse design of the medals features the mythical Phoenix rising above the flames from behind adobe buildings in old Phoenix, which is the scenic logo of the Phoenix Coin Club. The legend PHOENIX COIN CLUB is arched over the top and the legend EST. 1944 PHOENIX, ARIZONA curves under the design.

The medals’ shared reverse design commemorates the 100th anniversary of the state of Arizona. In relief, in the center of the reverse, a design taken from the middle of the Arizona state flag, with its central star and thirteen stripes radiating upward from the star, is bounded by an outline of the state.

Also on the reverse, the year 1912 appears on the left of the state and 2012 is on the right side defining the 100 years. Below the state border, the inscription reads FEBRUARY, 14TH — 48TH STATE referring to the date in 1912 that Arizona became the 48th state in the United States of America. The legend ARIZONA borders the field above the state outline, and CENTENNIAL borders the field below.

Individual silver and copper medals remain available for purchase, either by mail or at the Phoenix Coin Club show, scheduled for Oct. 28 from 8:00 a.m. to 3:00 p.m. at the Scottsdale Elks Lodge, 6398 E. Oak St., Scottsdale, Ariz.

Twenty-five serial-numbered single Proof silver medals remain available out of 100 minted. They will cost $41 each at the show or $45 via United States Postal Service.

The individual antiqued copper medals are sold out.

Seventy-five serial-numbered three-medal sets were produced, each containing an example of the silver, copper and antiqued copper medals. The sets will be offered for $56 at the club’s Oct. 28 show or $63 via USPS priority mail.

The owner of the Arizona Territorial Mint, Don Crowder, will be at the show with a live demonstration of a vintage U.S. Mint coining press every half hour. Attendees will have an opportunity to see how the Phoenix Coin Club medals were made, along with many others Crowder has produced. He will have other medals on display and for sale. ¦