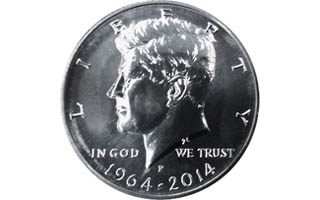 The coinage press in the research and development lab at the Philadelphia Mint churned out hundreds of dual-dated copper-nickel clad prototype Kennedy half dollars.

The research and development lab at the Phuiladelphia Mint produced dual-dated, 1964 – 2014 Kennedy copper-nickel clad half dollar prototype test pieces, struck from an obverse based on Roberts’ original higher relief sculptured model that was produced in late 1963.

These prototype pieces bear the dual dates, though that date configuration will not be used on any of the copper-nickel clad coins struck for collector sales.

The lab has destruction equipment that permits the test strikes to be “waffled.” The machinery contains blades that deform the struck pieces for later metal reclamation.

Security measures are taken to prevent any outside parties who might be processing the waffled pieces after they leave the Mint from selling them into the marketplace.