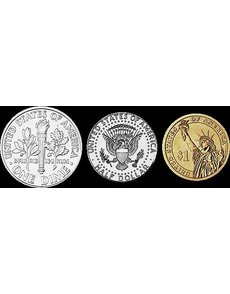 More than 6,100 unique visitors to the official White House website have signed a petition that seeks a complete overhaul of the U.S. coinage system, including eliminating the cent and 5-cent coin.

The petition seeks a coinage system based solely on the dime, half dollar and dollar. The quarter dollar denomination is not mentioned in the petition.

The petition on the We the People link on the WhiteHouse.gov website was initiated Sept. 22 by a Blacksburg, Va., resident identified only as Jordan S. A White House spokesman told Coin World Jan. 23 that the White House does not have full identification information for those who post petitions on the website link.

The petition asks the following of the Obama administration:

“According to the US Mint, in 2010 a single one-cent coin cost 1.79 cents to produce and distribute. Minting 3,487 million pennies in 2010 cost the US taxpayer $27.5 million in order to subsidize the existence of the penny.

“There is a similar situation with nickels. A single five-cent coin cost 9.16 cents to produce and distribute in 2010.

“We waste valuable time handling coins that aren’t worth much. Getting rid of these coins could save us up to $1 billion annually in lost opportunity costs.”

Production costs for the cent and 5-cent coin cited in the petition are lower than the most recently published costs for the two denominations. In early January, the U.S. Mint released its 2011 annual report, in which the cost to produce the Lincoln copper-plated zinc cent is listed as 2.41 cents and to produce the Jefferson copper-nickel 5-cent coin, 11.18 cents. The latest production figures include associated costs not previously assigned to the denominations.

Of the three denominations cited in the petition as being the basis of a revamped coinage system, two currently are not being struck for circulation.

In December 2011, Treasury Secretary Timothy F. Geithner indefinitely suspended production of Presidential dollars for circulation in an effort to save $50 million to $75 million annually from their production costs, since the Federal Reserve currently has a 12-year supply of the coins in inventory without any additional production needed. Circulation-quality manganese-brass clad Presidential dollars and Native American dollars will continue to be produced, albeit solely for collectors at numismatic premiums.

Copper-nickel clad Kennedy half dollars have been struck in circulation-quality since 2002 strictly for collectors, with none issued for general circulations.

“... As you note, the total production costs of both the penny and the nickel currently exceed their respective face values. The Obama Administration, along with Congress and other stakeholders, continues to review this issue and the best way to address it.

“One potential way to reduce the cost of the penny and nickel—as well as the cost of the other coin denominations—is by changing the composition of those coins to more cost-effective materials. The compositions of the current half-dollar, quarter-dollar, dime, five-cent and one-cent coins are set by law in the Coinage Act of 1965 (as well as other laws passed by Congress). Since that time, the material costs of those coins have increased substantially, while the face value of each denomination has remained constant.

“To help address this issue, in 2010, the President signed into law the Coin Modernization, Oversight, and Continuity Act. This law provides the Secretary of the Treasury with the authority to conduct research and development for alternative metallic coinage materials and requires the Secretary of the Treasury to make recommendations to Congress on potential new alloys. Since the law’s enactment, the United States Mint has been actively engaged in research and development work to find more economical metallic materials for our coinage.”

The U.S. Mint is currently in the second year of research and development leading up to recommendations for coinage metal alternatives. The Mint has a Dec. 14, 2012, deadline to submit a report with recommendations to Congress, according to the 2010 act.

Rios noted that President Obama also proposed legislation that would provide the Treasury secretary with the authority to prescribe the weights and compositions of all circulating coins.

If enacted, this legislation would enable the United States Mint to manufacture the nation’s coins at significantly lower costs, Rios said.

“Moving forward, the Administration will continue to work to ensure that United States coinage is produced and circulated as efficiently and effectively as possible,” Rios responded.

Rios’ verbatim response can be found at wwws.whitehouse.gov/petitions. ¦