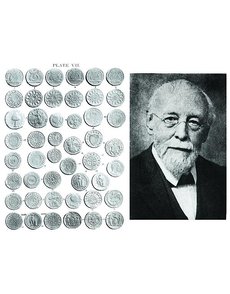 Sylvester Sage Crosby spent countless hours researching his book. Shown at right is one of the book’s plates.

Sylvester Sage Crosby’s timeless classic, The Early Coins of America, was the brainchild of Charles Chaplin, vice president of the New England Numismatic and Archeological Society.

Chaplin (not the silent movie star), named Crosby to chair a six-person Publications Committee in 1872 to write the definitive reference on American Colonial coins.

When the Publications Committee members realized the magnitude of the topic, five — including Chaplin — resigned.

Crosby was left alone to do six men’s work. Most people would have quit, but Sylvester came from strong stock. His father, Rev. Jazaniah Crosby, at age 18, walked 80 miles to start theological training at Phillips Exeter Academy.

Late in 1872, Sylvester began visiting archives, studying laws authorizing coinage, and corresponding with numerous collectors and scholars. He planned to write 10 sections of 32 pages each, to be published, as each was completed, in The American Journal of Numismatics. Ultimately, he required a dozen sections of 32 pages, for a total of 384.

Each section was priced at $1, and in 1875, when all were completed, the unbound set of 12 could be purchased for $12. This was a hefty price for the era, but The Early Coins of America was a hefty book, and impressively, it was illustrated by 12 photographic plates.

Crosby’s plates featured superb images of coins borrowed from famous collections, all produced by the new heliotype process. Only 350 sets of the 12 sections were printed, and today they are found in a bewildering variety of bindings. A total of 160 individuals and institutions subscribed to the project; their copies are bound according to their individual tastes.

Crosby himself bound a few in black half leather, then wholesaled the rest to dealer Lyman Low. After binding a handful in half leather, Low cased as many as 100 in a distinctive light blue cloth. Boston publishers Estes & Lauriat put a few in brown half leather bindings, and a handful of sets were never bound at all.

By the early 20th century, all 350 sets were sold, and as demand remained steady, prices rose. In 1945, dealer R. Green issued a reprint edition of 500 copies. The Token and Medal Society followed suit in 1965, as did Burt Franklin (in a smaller format) in 1970.

Quarterman Publications republished Crosby’s book in 1974, and Sanford Durst issued the most recent reprint in 1983. Quarterman is the pick of the reprint litter, with excellent photography and an introduction by Eric P. Newman.

Today, 1875 originals sell for at least $1,000 while the re-prints can go for as little as $50. Reference books generally become outdated quickly, but The Early Coins of America, at 138 years old, is still the standard Colonial reference!

And Crosby got the last laugh on the Publications Committee quitters. When the American Numismatic Society erected its new headquarters building in 1931, they engraved the names of six great numismatists into its entablature.

The only American name was “Crosby.”