The Joys of Collecting: Value beyond other media 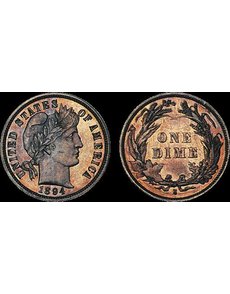 Ever since 1958, I have been a diehard advocate of the printed word. I love the Internet and use it daily. I listen to National Public Radio, and every now and again I watch television, but for me there is no substitute for having a hard copy of a favorite magazine, book or, for that matter, an auction catalog describing coins, tokens, medals and paper money.

Important to business decisions, the printed word often has value far in excess of the same information on the Internet or television, even thought it seems that much more money is spent on such electronic media.

I first realized this in 1958 when I was a guest on the NBC Today Show, hosted by Dave Garroway.

In autumn 1957, I had recently paid the incredible price of $4,750 for a gem 1894-S Barber dime. Several fellow dealers thought I had lost my sense of reason! The purchase was a wise one, it turned out, for not long afterward Ambassador R. Henry Norweb bought it from me for $6,000, as a gift for his numismatist wife, Emery May.

This was my first-ever appearance on network television. Back then there were not 200 channels.

My time slot came up, and I spent the best part of 10 minutes telling about the dime. Then Garroway was handed a slip of paper: a guest to follow me was delayed in traffic. Could I stay on for another 10 minutes or so? I was glad to do so.

By this time, news of the wondrous dime had been syndicated in newspapers nationwide. I had received more than 6,000 letters and post cards.

Back to NBC: Dave Garroway graciously allowed me to say how I could be reached should viewers with old coins want to contact me.

I was all set to be showered with tens of thousands of letters and cards. Would I run out of money to buy things?

That didn’t happen. I got only a dozen or two inquiries, none of value.

I learned then and there that if someone reads about an interesting item they can save or clip the article and act on it in leisure. In contrast, the minute I spent giving my address on the airwaves was ephemeral — not jotted down by many at the time. It was soon forgotten.

Relevant today is that each week I usually get from one dozen to several dozen emails from Coin World readers of this column. In contrast, I do blogs for Whitman Publishing and Stack’s Bowers Galleries on the Internet, and the number of responses I get in a year can be counted on the fingers of one hand.

Let’s hear it for print!