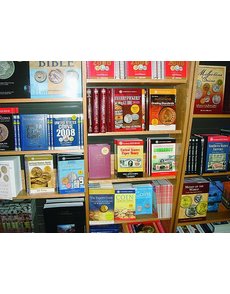 A Whitman Publishing display at a convention features books. There is no substitute for words in print. Today, various publishers, among them Amos Press, offer more good titles than ever.

My recent column on the permanence of the printed word versus words on a computer or television screen brought in more than a dozen comments from readers.

Philip Tasker wrote to say: “As usual I read your column in the November 25th Coin World. Also as usual it was insightful and thought provoking. Interestingly, there is an article in the November 2013 Scientific American titled ‘Why the Brain Prefers Paper’ that supports your proposition regarding the value of paper documentation. According to the article, studies show people understand and remember text on paper better than on a screen. It says screens are ... cognitively and physically more taxing than paper.”

“The December magazine edition of Coin World arrived in my mailbox today, which arrival reminded me that I had not dropped you a line commenting on your ‘Permanency of Print’ observations in the column presented in the previous weekly edition. How true your message is — Let’s hear it for print! — from my perspective.”

Cliff went on to say that items in print were often saved — sometimes for years. Things on the screen are here for the moment and then gone and forgotten.

Beyond the above, and changing the drift to books, these are permanent as well. Did you know that the first important numismatically related book to be printed in America, Joseph Barlow Felt’s 248-page opus, An Historical Account of Massachusetts Currency, is still useful today?

One of the most pivotal and important books in American numismatics and also one of the best “reads,” is Early American Cents, by William H. Sheldon. If you don’t have a copy, buy or borrow one. Warning: it may influence you deeply. I make this comment without reference to the fact that if it was not for this book, we would not have the 70-point grading system. We might have one that goes from 1 to 100 or 1 to 10 or something more logical.

My latest effort, A Guide Book of Civil War Tokens, is flying off the shelves, according to Whitman Publishing LLC. The list price is $24.95, but it can be bought for a bit less on the Internet. I have no way of knowing, but I believe that this book, which costs money, will have a more dynamic effect on numismatics than would the same information free on a website.

New Year’s resolution in advance: Build a numismatic library! More good books are in print today than ever before in the history of our hobby. If you spend several hundred dollars on interesting books — no more than you might pay for several Mint State Morgan dollars of common dates — next year will hold pleasures and profits that go far beyond the nominal cost.