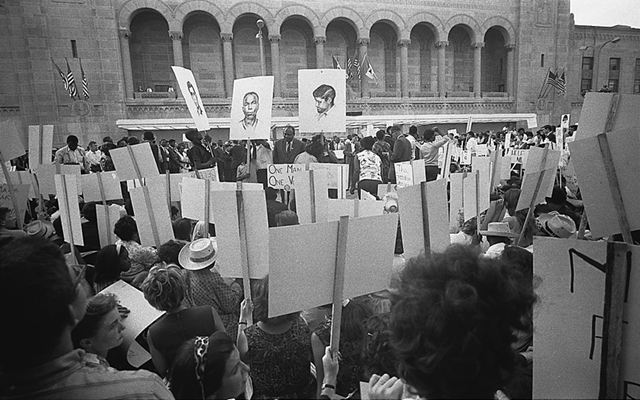 Image courtesy of the Library of Congress Prints and Photographs Division.

Three Civil Rights workers who died 50 years ago in Mississippi would be collectively honored with a congressional gold medal if legislation introduced in the House of Representatives is approved.

H.R. 4409, introduced April 4 by Rep. Bennie Thompson, D-Miss., would award a single gold medal posthumously and collectively to James Chaney, Andrew Goodman and Michael Schwerner “in recognition of the 50th commemoration of their kidnapping and subsequent murders” on June 21, 1964.

Chaney, Goodman and Schwerner were registering African-Americans to vote during the Freedom Summer of 1964 by assisting the Congress of Racial Equality in Mississippi.

The three men “were imprisoned in Neshoba County, Mississippi, without due process and released into the dead of the night into the hands of Klansmen,” according to the legislation.

Their disappearance “captured national attention and led to an investigation by the Federal Bureau of Investigations. Following a 44-day search by federal agents, the grim remains of James Chaney, Andrew Goodman, and Michael Schwerner were discovered in an earthen dam,” according to the bill.

The legislation points out that, though tragic, their deaths “helped to secure the passage of the Civil Rights Act of 1964 and later the Voting Rights Act of 1965 and led to the first permanent Federal Bureau of Investigation field office in the State of Mississippi.”

“These three valiant activists are representative of countless individuals who lost their lives on a quest for justice and equality, including Henry Hezekiah Dee and Charles Eddie More whose bodies were also found during the massive search for Chaney, Goodman, and Schwerner,” according to the bill.

Following the awarding of the gold medal, it would be given to Tougaloo College in Tougaloo, Miss., where it would “be available for display or temporary loan to be displayed elsewhere, as appropriate,” according to the legislation.

The legislation would also authorize the production and sale of bronze duplicates to the public.

The bill was referred to the House Committee on Financial Services.