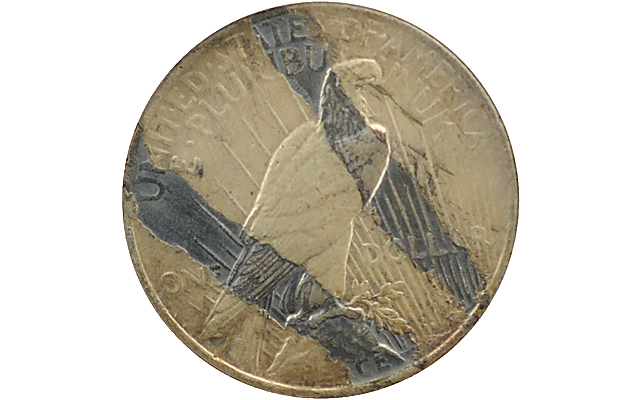 The reverse face of this 1922 Peace dollar shows two dark delaminated bands that ultimately proved to be contaminated with tin and lead. These metals probably represent contamination by solder. 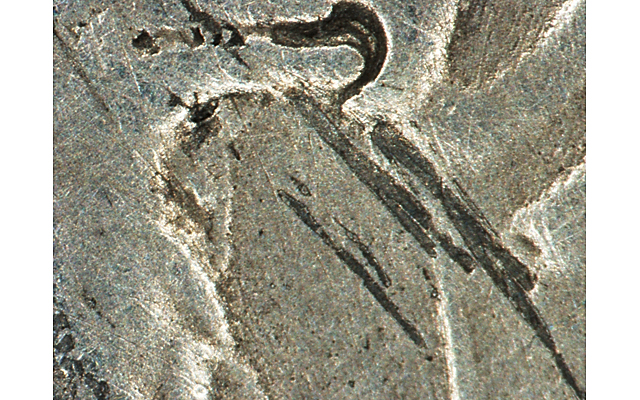 Thin black streaks appear within the broader gray bands on the 1922 Peace dollar. These are presumably enriched in tin. This photograph is from an area located beneath the beak of the eagle. 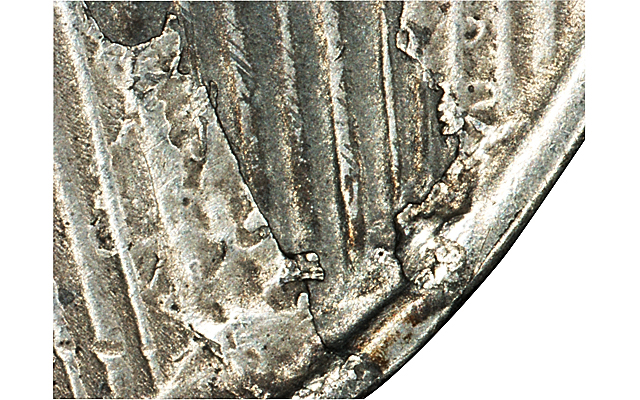 Close-up images shows the delaminated strip on the right of the 1922 Peace dollar. The area shown is located below the word DOLLAR. 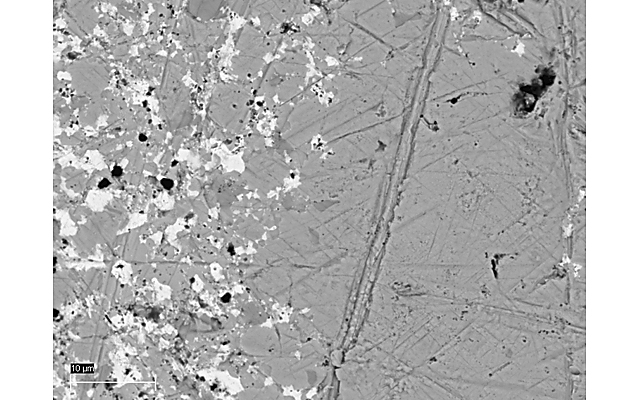 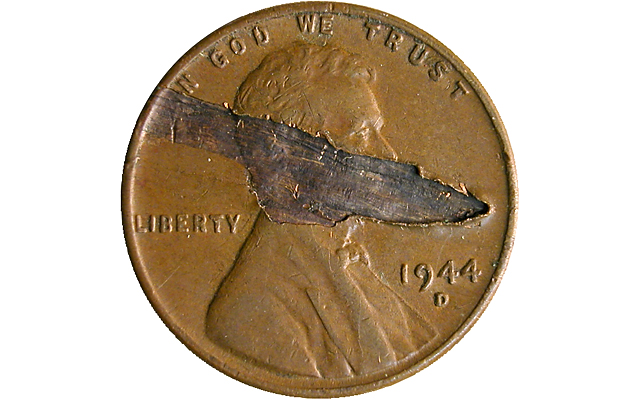 Loss of a lamination flake after the strike exposed dark subsurface metal in this 1944-D cent. An SEM/EDS analysis failed to detect any unorthodox metallic elements.

The surface of planchets and coins can sometimes peel and crack. These defects are known in the hobby as “lamination errors” although they would be more accurately referred to as delamination errors. One cause of lamination errors is thought to be the presence of contaminants in the alloy. But seldom has this theory been tested by subjecting exposed lamination errors to chemical analysis.

The best target for such an analysis would be a lamination error in which loss of a surface layer has exposed underlying metal of a different color or texture. Earlier this year, error dealer Jon Sullivan auctioned off on eBay a 1922 Peace dollar with two exposed lamination errors that appear as a pair of dark gray bands. The coin was purchased by John Lorenzo, who suspected from the outset that he might be looking at contamination by unconventional metals.

Lorenzo conducted a chemical analysis using scanning electron microscope/energy dispersive X-ray spectroscopy (SEM/EDS). In this technique a beam of electrons is used to excite a small area of metal, which then gives off X-rays in a range of frequencies that are unique to each element present. The composition of the normal-looking surface metal yielded no surprises. The dominant metal at 92 percent was silver. The next most abundant metal was copper. A normal Peace dollar is 90 percent silver and 10 percent copper.

The composition of the laminated bands was dramatically different. While silver was still the most abundant metallic element (59 percent), the next most abundant elements were tin (34 percent) and lead (5 percent). Copper only accounted for 1.5  percent of the total. Tin (Sn) and lead (Pb) are not supposed to be present at all in silver dollars.

Seeking to corroborate and refine his results, Lorenzo sent the coin to Roger Paulen (Geological Survey of Canada), who first performed an X-ray fluorescence (XRF) analysis. In this technique, high-energy X-rays are directed at a sample which, in turn, gives off a range of lower-energy X-rays that reflect its metallic composition.

The XRF analysis also detected tin and lead, but at significantly lower proportions (Sn at 2.6 percent, Pb at 1.2 percent). The silver (Ag) and copper (Cu) values were respectively 91 percent and 4.4 percent. In this analysis, lead and tin were reduced to little more than trace elements, although their presence was still anomalous.

Paulen was not satisfied with these results, as the X-ray beam couldn’t be focused enough to avoid capturing large swathes of the normal silver surface flanking each gray band. This had the result of elevating the percentages of silver and copper and depressing the percentages of tin and lead. Paulen wanted to restrict his sampling to just the gray bands and particularly those areas that were marked by black streaks and white specks (see photos).

Paulen and his colleague Patricia Hunt subjected the coin to a second SEM/EDS analysis. The particular device used in this study was so sophisticated that an X-ray beam could be focused on an area of only a few square microns.

The first few passes provided an average set of values for the gray bands. Tin averaged 24 percent while lead topped out at 3 percent. Lead did not show up in every sampling because it was not uniformly distributed within the gray bands. In other words, the alloy was not homogeneously mixed. Lead was instead concentrated in the form of tiny, highly reflective white masses of 95 percent purity.

The mixture of tin and lead prompted John Lorenzo to suggest that the gray bands represented solder contamination. This does seem to be the most likely explanation.

The most common forms of solder are composed of a tin-lead alloy, with tin dominating. It’s possible that a spool of solder wire was accidentally dropped into a crucible containing molten silver and copper.

Not all dark lamination streaks reflect the presence of nonstandard metals. Among this post's images is a 1944-D Lincoln cent with dark subsurface metal exposed by a lamination flake that detached after the strike. The only metals that showed up in John Lorenzo’s SEM/EDS analysis were copper and zinc — normal constituents of cents of this period.