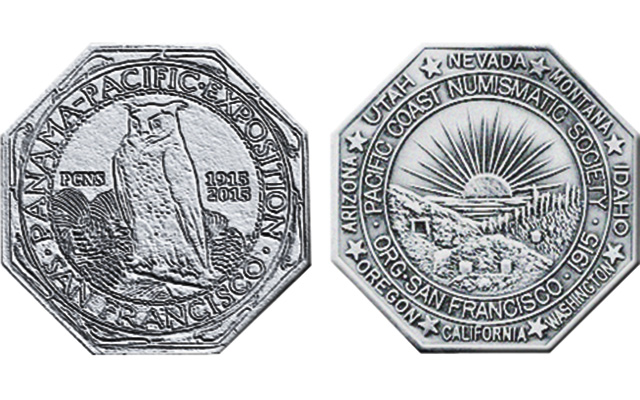 Medal celebrates the 2015 centennial of the Pacific Coast Numismatic Society. It will be released in silver and bronze versions in September 2015, struck to order.

A century ago, numismatist Farran Zerbe and a group of local businessmen in San Francisco founded a coin collectors club to capitalize on the upcoming Panama-Pacific International Exposition in that California city.

A century later, the Pacific Coast Numismatic Society is still active and serving collectors living in the western region of the nation.

Zerbe, the former president of the American Numismatic Association (1908 to 1910), ensured that the new regional club would host the ANA convention in San Francisco in 1915.

Zerbe also dominated the numismatic celebrations at the Panama-Pacific International Exposition. Zerbe headed the exposition's official Coin and Medal Department, which sold the official commemorative coins and medals authorized by Congress to celebrate the event. Zerbe was instrumental in proposing the commemorative coin program, which was the largest of its kind since the first U.S. commemorative coins were struck in 1892 and 1893. The 1915 exposition itself was a celebration both of San Francisco's rebirth following the devastating 1906 earthquake and fires, and of the opening of the Panama Canal in 1915.

Zerbe was responsible for selling the five commemorative coins, all struck at the San Francisco Mint: a silver half dollar, and gold dollar, quarter eagle and two $50, one round in shape and the other octagonal.

The PCNS has long used a modified version of the reverse of the octagonal $50 coin for its medals, and that practice continues with the centennial edition of the series, to be released in September 2015.

The obverse of the medal is based upon the reverse of the commemorative coin, featuring as the central device an owl sitting on a pine branch amid pine cones. The medal includes the coin's statutory inscriptions identifying the exposition and city of origin, and the eight highly stylized dolphins that appear along the flat portions of the eight-sided coin. The medal includes the additional celebratory inscription PCNS 1915/2015 in the fields on either side of the owl.

The reverse of the medal features the PCNS logo, depicting a rayed sun overlooking a coastal scene. The names of the states that make up the regional organization's outreach — Arizona, California, Idaho, Montana, Nevada, Oregon, Washington,  and Utah — encircle the logo, as does the name of the organization and its origin in San Francisco in 1915.

The PCNS is known for the research papers it publishes periodically, and it is calling for articles to be published during its centennial year. The authors of the top three articles published this year will receive examples of the commemorative medals.

"New papers are submitted annually via the PCNS Papers Contest, which is open to all numismatic writers, not just PCNS members," according to the society's website. "Please view the PDFs for Papers Rules and our Copyright Policy."

Examples of the 2012 papers and 2013 papers may be read at special pages at the group's website.