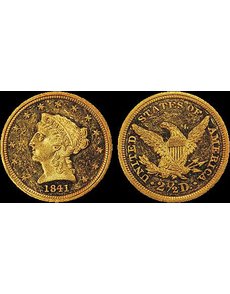 An 1841 Coronet gold $2.50 quarter eagle, graded Mint State 61 by PCGS, is shown. The third-party grading service announced it will begin grading some 1841 quarter eagles as circulation strikes rather than Proof strikes. 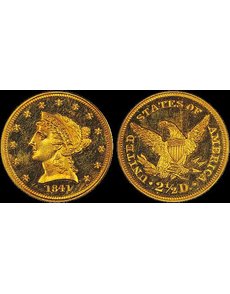 Professional Coin Grading Service has announced, effective immediately, that it will begin grading and certifying some 1841 Coronet gold $2.50 quarter eagles as circulation strikes rather than Proof strikes.

Nicknamed “The Little Princess” by hobbyists, the 1841 Coronet gold quarter eagle is one of the most famous, and rare, U.S. gold coins.

A statement issued by PCGS said, “After two years of research by numerous experts both at PCGS and in the numismatic community at large, PCGS has determined that the most likely scenario is that both a small number of circulation strikes and an even smaller number of proofs were struck.”

David Hall, co-founder of PCGS and president of Collectors Universe Inc., parent company of PCGS, explained: “This is a monumental decision on our part, and we have taken two years to reach the decision. The really interesting thing about the whole process is that this is not a unanimous point of view in the numismatic community. There are world class U.S. coin experts on both sides of this issue. Some of the smartest numismatic minds of all-time feel very strongly that circulation strike 1841 Philadelphia Mint Quarter Eagles were indeed minted. But there are also some of the best coin minds of all-time who believe only proofs were struck.”

Hall continued, stating: “The list of experts who feel that some 1841 Philadelphia Quarter Eagles are circulation strikes reads like a who’s who of numismatic experts, including David Akers, Q. David Bowers, Harvey & Lawrence Stack, Doug Winter, Jeff Garrett, Anthony Terranova, Jim Halperin, Fred Weinberg, Don Kagin, David McCarthy, Steve Contursi, Jason Carter and Gordon Wrubel. But equally illustrious experts feel just as strongly that only proofs were struck, including numismatic researcher extraordinaire and my friend and fellow PCGS founder John Dannreuther, PCGS CoinFacts President Ron Guth, and PCGS Director of Grading Mike Sargent! I have never seen the coin expert community so divided over a technical numismatic issue and this is one of the few times in our nearly 40-year relationship that John Dannreuther and I have disagreed about a pure coin issue.”

Hall further stated: “So after two years of research, after showing five different specimens to all of these experts and after trips to the Smithsonian Institution, the question became ‘What should we do about it?’ Our choices were to do nothing or to make a monumental change in the way we attribute some 1841 Philadelphia Quarter Eagles.

Hall also added a word of caution, saying: “While PCGS has made the decision to recognize circulation strike 1841 Philadelphia Quarter Eagles, it is a decision that could be subject to change. The majority of the experts involved feel this is the right thing to do, but it is possible that further research will show that this is not the case. If that happens, then PCGS would once again change the way it attributes 1841 Quarter Eagles.”

According to the PCGS CoinFacts condition census, found at www.pcgscoinfacts.com, four Proof 1841 Coronet quarter eagles are known, the finest being the gem Proof example housed at the Smithsonian Institution, and 12 or 13 circulation strikes exist, the finest (and only Mint State example) being the coin PCGS has just graded Mint State 61, which is owned by a California collector, according to PCGS. This latter coin, along with two other examples, was procured for research by Steven L. Contursi of Rare Coin Wholesalers (found online at www.rarecoinwholesalers.com).

The first 1841 Coronet gold $2.50 quarter eagle designated by PCGS as a circulation strike is scheduled to be sold by Stack’s Bowers Galleries at auction March 22.

The coin, graded Extremely Fine 45, will be sold during the “Rarities Night” auction held in conjunction with Whitman’s Baltimore Coin Expo, March 22 to 25. (For more information on this sale, visit the Stack’s Bowers Galleries website at www.StacksBowers.com.)

PCGS has published a 35-page study of the 1841 Coronet quarter eagles, which includes both the case for classifying some as circulation strikes, written by David Hall and others, and a case for continuing the coin’s Proof-only status, written by John Dannreuther and Ron Guth.

The study also includes a new, thoroughly researched registry of known examples, compiled by Ron Guth and P. Scott Rubin, along with images of 15 of the 16 or 17 known pieces.

The study is free to all interested PCGS dealers, PCGS CoinFacts subscribers and members of the PCGS Collectors Club. Persons interested in receiving a printed copy may telephone PCGS customer service at 800-447-8848 or visit the PCGS website at www.PCGS.com to view the study online. ¦