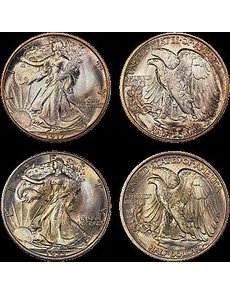 The two finest collections of circulation-strike Walking Liberty half dollars in the Professional Coin Grading Service’s Set Registry will face off Aug. 7 to 11 in Philadelphia in a “Walker Showdown” hosted by the grading service.

The display will be presented at the PCGS booth (No. 1605) during the American Numismatic Association World’s Fair of Money at the Pennsylvania Convention Center, 1101 S. Arch St.

“This will be the first time either of these top-of-the-line sets has been publicly shown anywhere,” said BJ Searls, Collectors Universe Set Registry manager. “These are the best-of-the-best in the category, ‘Walking Liberty Half Dollars with Major Varieties, Circulation Strikes (1916 — 1947),’ and they’re beautiful.”

The two 66-coin sets in the “showdown” are the Gerald Forsythe Collection, ranked by the PCGS Set Registry as both the Current Finest and All-Time Finest, and a newcomer to the Walking Liberty half dollar registry category, the High Desert Collection.

“The Walking Liberty half dollar is one of America’s most popular designs, but also one of the most challenging coins to collect because of notoriously poor strikes of some of the San Francisco Mint issues and low Mint State survival rates for such coins as the 1919-D and 1921-S,” said Don Willis, president of PCGS

The Forsythe Collection has been honored as the Current Best and All-Time Finest for three consecutive years, 2009 to 2011.

Visitors to the ANA convention will be able to see 132 of the best Walking Liberty half dollars with the side-by-side exhibits of the Forsythe and High Desert collections.

The individual coins also can be viewed online.