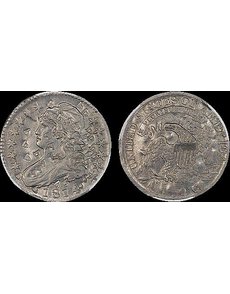 The only known counterpunched and engraved 1814 Capped Bust half dollar experimental pattern struck in platinum has been graded and encapsulated by PCGS.

The piece, graded PCGS Secure Plus Extremely Fine 40, is the only one of the three platinum half dollar patterns that is counterpunched on the obverse with 33 capital P’s and engraved PLATINA in italics on the reverse below the motto E PLURIBUS UNUM. The eagle’s head separates PLATINA between the first A and the T.

The platinum pattern is owned by Midwest collector Charles Link.

When the counterpunched and engraved platinum pattern sold at public auction for $138,000 in an Aug. 12, 2011, Heritage Auctions sale, the piece was encapsulated, but ungraded, in a Numismatic Guaranty Corp. holder.

PCGS is using the Judd 44a attribution to differentiate it from the other two 1814 Capped Bust half dollar patterns in platinum that are not counterpunched or engraved.

PCGS CoinFacts notes that one such coin is part of the National Numismatic Collection at the Smithsonian Institution, and it has an obvious test cut. Another example is rumored to exist based on a mention of it by researcher Walter Breen in a 1974 auction catalog; however, that coin has not been confirmed or seen in the 38 years since Breen’s comments.

The U.S. Mint never struck any coins in platinum for general circulation.

The full PCGS CoinFacts description and an illustration of the Judd 44a pattern are online at www.pcgscoinfacts.com/Coin/Detail/515721. ¦