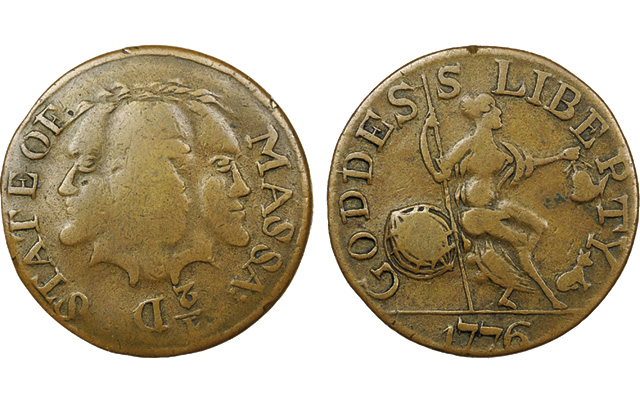 The 1776-dated Janus Head copper has long been attributed to Paul Revere. The only known specimen will be sold as part of the Don Partrick Collection.

The media has been aflutter recently about the time capsule found in a cornerstone of the Massachusetts State House.

The tiny copper cask was interred in 1795, exposed in 1855 by accident, then forgotten about until its rediscovery during recent construction. It was deposited during a ceremony led by Samuel Adams, in 1795 governor of Massachusetts, and Paul Revere. Revere is said to have contributed an engraved silver plate, and contemporary documents also reference “a collection of silver and copper coins” dating back to 1652.

1652?! That means Massachusetts silver! Could it be NE shillings that were last touched by Paul Revere? This is exciting stuff, though the contents of the time capsule were not yet known when this was written (Editor’s note: see page 1 for coverage of the opening of the time capsule).

Oddly enough, just as coins with a provenance to include Paul Revere are in the news, another coin that has long been attributed to Paul Revere has reappeared, only to have its Revere association questioned. The 1776-dated “Janus Head” copper was sold to the great 19th century collector Matthew Stickney before 1859.

From the 1907 auction of the Stickney Collection, the copper went to the collection of Col. James Ellsworth, and then by private treaty into the Garrett Collection in 1923.

It has been in the Donald Partrick Collection since the 1980 Garrett sale, and will be offered by Heritage Auctions at its 2015 Florida United Numismatists convention auction.

Knowledge changes over time, both technical numismatic data and historical context. The Janus Head copper, together with the unique 1776-dated Pine Tree and Standing Indian coppers in the Massachusetts Historical Society, were all celebrated rarities for decades.

Boston spent 1776 preparing for an English reinvasion, and Paul Revere spent the year as a militia commander; making small change would not have been a priority.

All three of the “1776” Massachusetts coppers were all clearly made by the same hand at roughly the same time. Unfortunately, all three coins show design anachronisms and technical details that make an 18th century origin of the pieces impossible.

It is likely that all three were made in the 1850s, when knowledge of Colonial coins was in its infancy but the values of rare ones were increasing by the year.

If there is a Janus Head in the time capsule with a note about it from Paul Revere, I’ll be happy to be proven wrong!