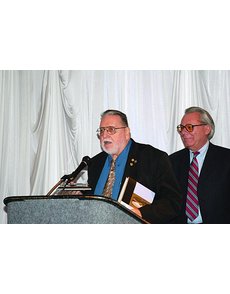 The Robert Friedberg Award, presented to an author in recognition for an outstanding book or other literature, was given to David Thomason Alexander, left, for American Art Medals, 1909 — 1995, published by the American Numismatic Society. PNG Board member Jim Simek made the presentation. 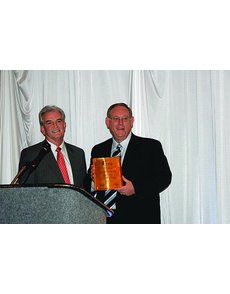 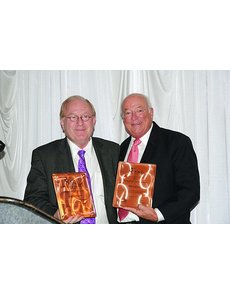 Barry Stuppler, left, presents Joel Anderson the Significant Contribution Award for Joel and Charles Anderson’s exceptional, beneficial efforts on behalf of PNG, the profession and the hobby. (Charles Anderson was not present.) 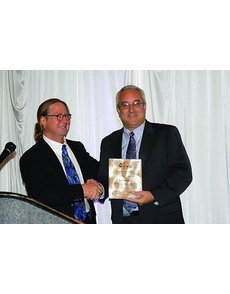 The award was presented to Montgomery at the PNG Day summer banquet on the eve of the American Numismatic Association World’s Fair of Money at the Donald E. Stephens Convention Center.

The award is named after PNG’s founding president, who spearheaded the 1953 launch of the organization. The honor is presented to a PNG member-dealer who has made a significant contribution to the guild or to the numismatic fraternity in general the past year.

Brothers Charles and Joel Anderson jointly received the Significant Contribution Award for their exceptional, beneficial efforts on behalf of PNG, the profession and the hobby.

The Andersons’ family business, founded by their grandfather in 1917 as a small newsstand in Alabama, has grown to include Whitman Publishing, publisher of A Guide Book of United States Coins (the “Red Book”). Anderson Publishing also hosts the Whitman Coin and Collectibles Expos in Baltimore, Philadelphia, Nashville and Atlanta.

The Art Kagin Ambassador Award was given to public relations executive and longtime collector Donn Pearlman. The Kagin Award is named after a former PNG president and nationally-known Iowa dealer who provided distinguished service as an advocate of numismatic goodwill.

The Robert Friedberg Award, presented to an author in recognition for an outstanding book or other literature, was given to David Thomason Alexander for American Art Medals, 1909 — 1995, published by the American Numismatic Society. The Friedberg Award is named in honor of a publisher and author of numismatic reference books, and is not automatically given each year. It is awarded only when there is deemed to be a worthy recipient or recipients.

John N. Rowe III from Dallas was honored at the banquet for his 50 years of PNG membership. Six other PNG member-dealers were recognized for each attaining 25 years of membership: Jan Olav Aamlid of Chonburi, Thailand; Tom Denly from Boston; Bruce Kutcher from Nahant, Mass.; John Maben from Sarasota, Fla.; Richard Joseph Schwary from Inglewood, Calif.; and Kurt Spanier from Madrid, Spain.

For additional information about the awards for the PNG, contact Robert Brueggeman, PNG Executive Director, 28441 Rancho California Road, Suite 106, Temecula, CA 92590. Telephone the PNG at 951-587-8300, email the organization at info@PNGdealers.com or visit the PNG website at www.PNGdealers.com. ■