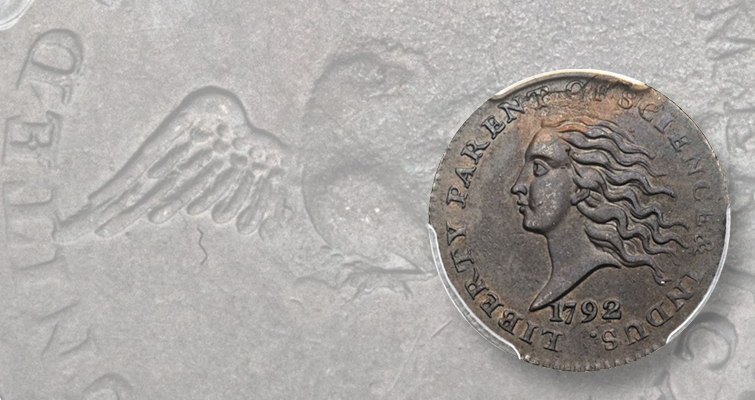 Heritage's Long Beach sale at the September Long Beach Expo offered numerous rarities, including this rare 1792 copper half disme pattern that held steady in price since its last auction appearance. 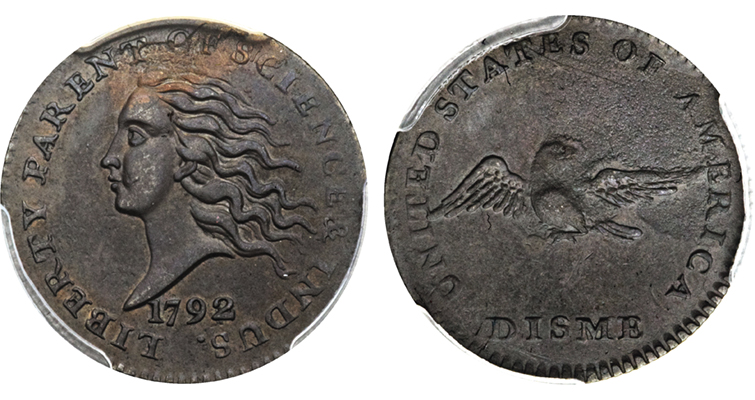 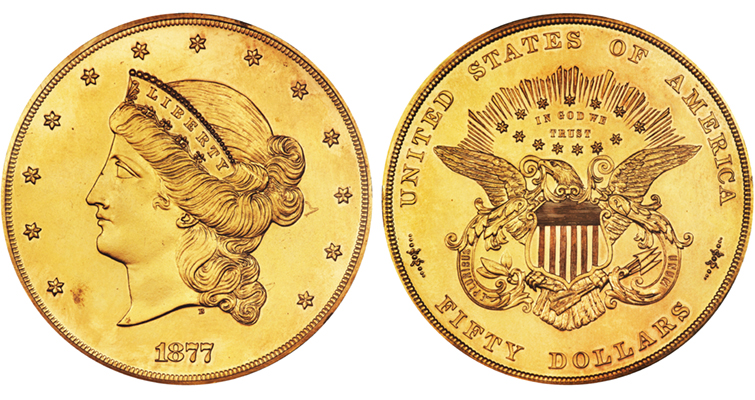 An impressive gilt copper 1877 $50 half union pattern brought $176,250 at Heritage’s September 2015 Long Beach Expo auctions, the same price that it brought at Heritage’s Long Beach sale in 2014. It is housed in an oversized NGC encapsulation. 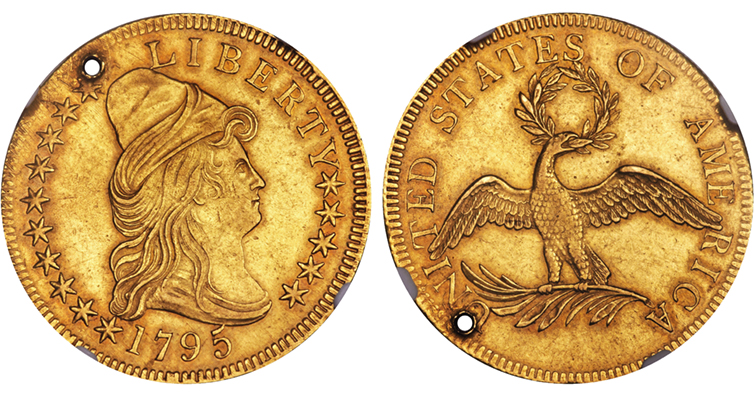 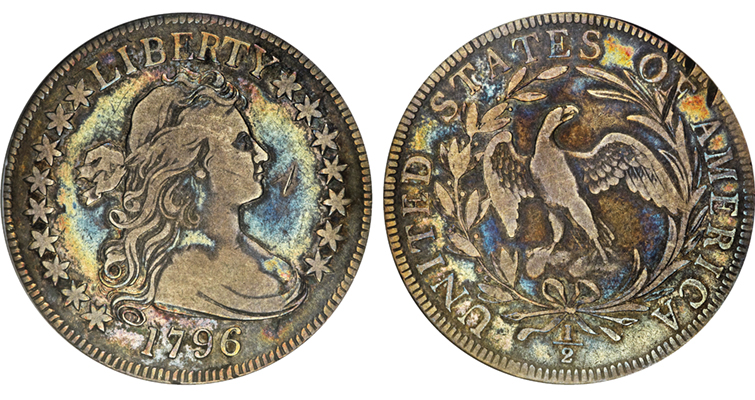 An attractive 1796 Draped Bust, Small Eagle half dollar with Very Fine details but some heavy marks that ANACS classified as damage sold for $38,775 on Sept. 17. It had previously sold at a 2006 Heritage sale for $43,125. 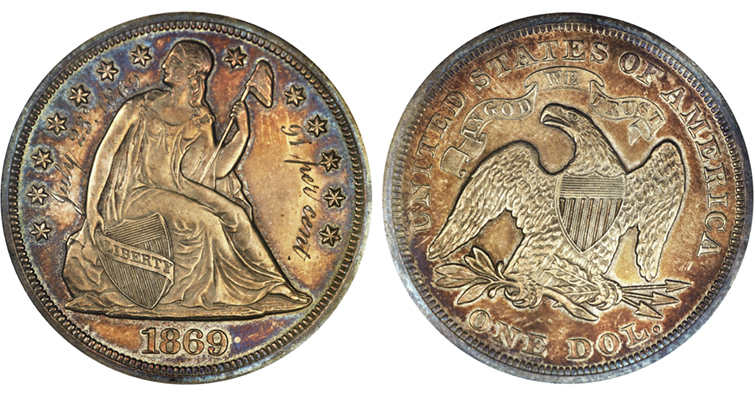 A Proof 1869 Seated Liberty dollar with obverse graffiti that may refer to a contemporary event sold for $1,527.50 with buyer’s fee during Heritage’s Sept. 18 Long Beach Expo auction.

Two rare pattern coins held steady in price while they led Heritage’s Sept. 17 to 20 U.S. coin auctions held during and immediately after the Long Beach Expo in southern California.

Heritage’s U.S. coin sales realized $11,635,140 as of Sept. 22. The addition of the firm’s world and currency auctions raises Heritage’s auction total to more than $23 million at the final Long Beach Expo of 2015.

Leading the U.S. coin portion was a copper 1792 pattern disme, listed as Judd 10 and Pollock 11 in the standard reference books to the series and graded Extremely Fine 40 by Professional Coin Grading Service. The rare piece — one of approximately 20 known and included in a 1914 American Numismatic Society exhibit in New York — sold for $211,500. Incidentally, that was the exact same price that it had sold for earlier this year when offered at Heritage’s sale of the Donald G. Partrick Collection at the Florida United Numismatists auctions in January.

One of the most visually impressive pieces offered at the sale was an 1877 $50 pattern, measuring two inches in diameter and listed as Judd 1549 and Pollock 1722. Graded Proof 63+ by Numismatic Guaranty Corp. and housed in an oversized slab, it brought $176,250.

Two types of $50 patterns, nicknamed half unions, were produced in 1877: one with a Large Head design and another with a Small Head design. The example offered at Long Beach was of the Small Head type and is composed of gilt copper, although it’s unclear if the gold was added at the Mint or after it left the Mint. Regardless, the overall appearance is akin to a gold coin.

The production of these patterns was more the result of the desire of then-Mint Director Richard Linderman than any actual need. Heritage notes, “He had many patterns struck for unofficial reasons during his later terms as Mint Director and formed a spectacular collection of his own, mostly of pattern and restrike issues,” before suggesting that these coins were a sort of “pet project.”

The offered gilt copper example can be traced to a 1948 B. Max Mehl sale where the famed Texas dealer wrote: “Only about fifteen specimens minted in all. Of highest historical interest and, of course, excessively rare. I doubt if more than two specimens have been offered at auction in the past more than thirty years. A beautiful and thrilling coin to own.” It was purchased for the collection of Egypt’s King Farouk and then sold to U.S. collector Robert Schermerhorn, who Heritage notes was “one of the few Americans to attend the sale in Cairo.”

A holed 1795 Draped Bust gold $10 eagle from the first year of gold coin production at the Philadelphia Mint and graded About Uncirculated Details by NGC sold for $42,300.

Heritage observes, “The small hole at star 10 is the only problem noted,” and it displayed otherwise handsome surfaces and represented an early die state. The holed beauty, classified in BD-1, die state a/a in the Bass-Dannreuther reference on the series, is from what is likely the first die marriage struck, making this one of the first gold coins to be produced at the early Philadelphia Mint.

Another expensive coin with a problem was a 1796 Draped Bust, Small Eagle, 16 Stars on Obverse half dollar, classified as Overton 102 in the standard reference. The type is in heavy demand as a two-year type coin, and Mint records indicate that all Draped Bust, Small Eagle half dollars were delivered in 1797 (specifically on Feb. 28, March 21, and May 26). It was graded by ANACS as Very Fine Details, Damaged, and sold for $38,775.

The half dollar, classified as Amato-218 in Jon Amato’s book The Draped Bust Half Dollars of 1796-1797, which documents all known examples in the series, showed damage consisting of some heavy marks, especially on the reverse. Such problems are often seen on early coins and Heritage wrote, “It must be remembered that about 35 percent of extant 1796–1797 half dollars reveal one or more impairments (plugs, extensive scratches, graffiti, harsh cleaning, planchet defects, re-engraved devices, smoothed surfaces, etc.), most of which are much more serious than seen on the present coin.” Otherwise, it had handsome color on both sides and solid detail.

While not one of the more expensive coins in the sale, an 1869 Seated Liberty dollar graded by ANACS as Proof, Genuine, Graffiti, sold for $1,527.50. The piece provides an opportunity for future research as engravings on the obverse read “July 23, 1869” in the left obverse field, and in the right obverse field, “91 per cent.” Heritage observes, “The precision of the engraving suggests that this piece might have been prepared as a presentation coin of some sort, although the meaning of “91 per cent” has been lost.”