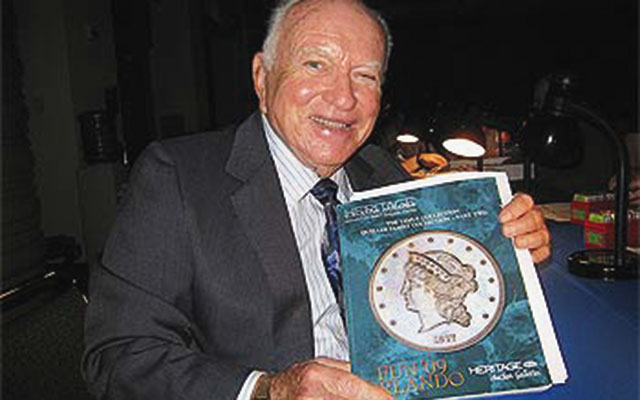 Mr. Queller is probably best known for owning the Mickley-Hawn-Queller specimen of the 1804 Draped Bust dollar. Heritage Auctions sold the coin in an April 17, 2008, auction for $3,737,500.

Mr. Queller is survived by his wife of 67 years, Libbie, plus four children and nine grandchildren. Services were held Dec. 28 in New Jersey.

As a boy, Mr. Queller collected first day covers of inaugural postal routes. In 1967, after taking his family to Israel shortly after the Six Day War ended, he began collecting medals, according to a tribute published online at Heritage Auctions website www.HA.com (click on U.S. coins at the far right of the home page).

“He collected every denomination, business and Proof strikes, patterns and commemoratives,” according to Heritage’s tribute.

Mr. Queller also put together another collection, the Lemus Collection of patterns, named for his wife, Libbie Lemus. The collection included the 1792 Silver Center cent.

Mr. Queller was born June 27, 1921, in Brooklyn, N.Y., and worked in his father’s hardware store along with many other jobs.

“When the war ended, he declined the opportunity to become an officer and instead headed home to Brooklyn. There, he began to formulate a business plan that would allow him to take the foundation of his father’s retail hardware store and transform it into a wholesale warehouse supplying the postwar economy of New York with high-quality industrial tools,” according to the Heritage tribute.

Mr. Queller retired in 1997 and moved to Boca Raton, Fla