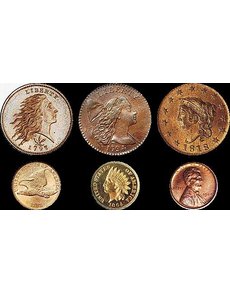 Among the cents that have graced the circulation landscape since the United States Mint began issuing them are, top row, the Flowing Hair, Liberty Cap and Coronet cents; and bottom row, left to right, Flying Eagle, Indian Head and Lincoln cents.

Among the recurring stories in newspapers are those calling for the elimination of the “penny.”

This sentiment goes back for a long time. In 1894, the Chicago Times published an article on the subject, and I am sure that long-ago article was not the first.

Today, in 2012, the cent, bearing the portrait of Lincoln since 1909, has little use on its own. In fact, in many stores you can get them for free — in the “Give a penny, take a penny” tray on the counter.

Giving them seems to be more popular than taking them — as a local hardware merchant related to me as he took the surplus out of an overflowing pile.

I suppose, in today’s recessionary times, there would be a point when coins would flow out rather than in — perhaps if a “Give a quarter, take a quarter” tray were developed.

Besides, we need cents as the ideal way to become a numismatist. Today, as ever, Lincoln cents in circulation can be fun to collect, although hardly anything in circulation predates 1959.

A nice gift from Congress and the Treasury Department was the four-coin series of new reverses of 2009 commemorating Lincoln’s life, followed by a shield motif, new in 2010 and still with us.

Can you imagine the boost numismatics would have if a new reverse motif were launched each year? The readership of Coin World would double!

Today, not even a 1-cent stamp has utility by itself, and I don’t think penny candy exists anymore.

As useless as the cent may be in terms of purchasing power and with the opportunity to get some of them free, things are quite different from what they were when the denomination was launched by the Mint in 1793.

Since then, they have been issued continuously except for the year 1815, when there was a copper shortage. Along the way there have been many interesting designs.

Here’s hoping that the Lincoln cent, now made of copper-plated zinc and perhaps to be made of steel or aluminum, will be around for a long time. It is part of American life and should remain that way.