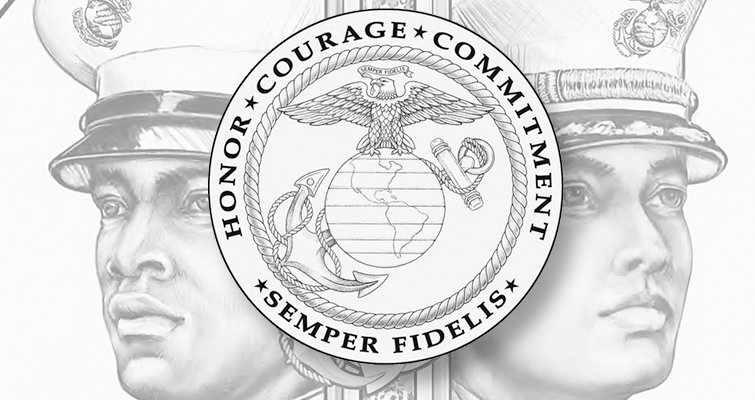 These proposed designs for a 2.5-ounce silver medal recognizing the legacy of the U.S. Marine Corps received recommendation June 23 from the CCAC.

The CCAC considered 10 obverse and 10 reverse designs proposed for the silver medal. Its recommendations are similar to those of the Commission of Fine Arts, which reviewed the same proposed designs on June 18.

The CCAC-recommended obverse depicts, according to the U.S. Mint narrative, “a pair of Marines, officer and non-commissioned officer, standing shoulder-to-shoulder in dress uniform. The sword between them bears the hilt appropriate to each rank. Centered on the sword is the Eagle, Globe, and Anchor emblem. The inscriptions on the sword are UNITED STATES MARINES and SEMPER FIDELIS,” meaning Always Faithful.

The recommended reverse design features “the Eagle, Globe and Anchor encircled by a rope border. The Marine Corps’ core values of HONOR, COURAGE, and COMMITMENT, and the motto SEMPER FIDELIS are inscribed around the outer border.” 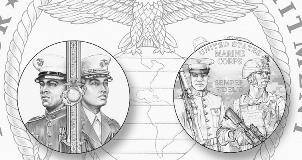