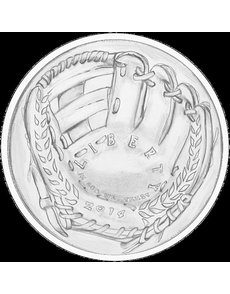 The Citizens Coinage Advisory Committee recommends the same obverse design proposed by the Commission of Fine Arts for the shared obverse on the three 2014 National Baseball Hall of Fame commemorative coins.

A baseball glove emblazoned with the word LIBERTY has won the strong backing of the Citizens Coinage Advisory Committee, meaning the design has support from both panels that review coin proposals for the U.S. Mint.

If accepted by Treasury Secretary Jack Lew, the glove design will adorn the obverse of the nation’s first concave/convex coins — a set of three coins honoring the National Baseball Hall of Fame.

The CCAC’s vote, like that of the Commission of Fine Arts, was unanimous.

Meeting in Washington July 23, each of the 10 CCAC members rated the glove design a “3.” That gave the design an overall score of 30 — the highest score possible under the way the committee reviews coins.

Noting that the reverse features a baseball, committee members agreed with the CFA that the selection of a glove for the obverse was a natural choice.

“You have a home run,” exclaimed CCAC Chair Gary Marks.

The decision, said Donald Scarinci, a New Jersey lawyer and medals specialist, was “a no-brainer.”

When the program gets under way next year with a gold $10 coin, silver dollar and copper-nickel clad half dollar, Mint officials expect the commemorative coins to be among the most celebrated the Mint has produced.

The designs’ debut at a Hall of Fame event in Cooperstown, N.Y., later this year is certain to attract a galaxy of baseball celebrities and attention in sports media.

Both review panels urged the Mint to drop one feature from the design, a pair of wheat sheaves that Hall of Fame representatives also dislike.

Although all of the other 15 baseball designs reviewed by the panel received points in the CCAC balloting, the glove’s closest rival was another glove. It was described as a 1930s-1940s style glove and was submitted in a 3-D format as a floating golden disc. It got 10 points, well behind the winning glove’s 30 points.

The glove’s endorsement was one of the highlights of a rare two-day session by the CCAC.

The meeting also saw a freshman member of Congress successfully get the panel to back a number of revisions to the Mint’s designs for a congressional gold medal honoring four young black girls who were killed Sept. 15, 1963, in the bombing of a Birmingham church.

Rep. Terri A. Sewell, D-Ala., was the first member of Congress to ever appear before the CCAC, and panel members appeared to have been swayed by her presentation.

Getting the medal to honor the girls was Sewell’s first legislative victory on Capitol Hill, and she proved to be determined to fashion a design she said would properly honor the four children.

She said she didn’t think the girls appeared young enough or ethnic enough in the Mint’s designs. “No flowers, please,” she told the panel, objecting to flowers on the designs submitted by the Mint to the CCAC.

Donald Everhart II, one of the Mint’s sculptor-engravers and present at the CCAC meeting, quickly sketched the changes that Sewell and two of the girls’ sisters told the committee they wanted.

Those sketches became obverse “design 18” and reverse “design 12.” They secured 29 and 28 points respectively out of a possible 30 points in the balloting, to secure the panel’s endorsement.

Quickly sketching a new design is something Everhart, one of the Mint’s most prolific sculptor-engravers, and Steve Antonucci, the Mint’s head of digital technology, had done also a few months earlier.

When the committee had stalled over a design for the reverse of the Baseball Hall of Fame coins, Everhart had quickly won over the committee with a sketch of how the coin should be lettered.

This time, working directly with Sewell and incorporating her suggestions, Everhart reworked a design that showed four girls in silhouette. He moved the four girls’ names to the rim and placed the wording “Pivotal in the Struggle for Equality” on the center of the silhouettes over the date, “September 15, 1963.”

Sure, that’s a lot of text, Everhart said in response to a question.

But the 3-inch palette of a congressional medal could handle it, he said.

A number of the committee members said they had come to the meeting planning to vote for other designs submitted by the Mint. But Sewell’s presentation dissuaded them from pressing their own ideas, CCAC members said.

The CFA favored an obverse with multiple silhouettes, but CCAC members said that design too closely resembles a recent Girl Scouts commemorative that also shows young girls in silhouette.

The CFA also backed the reverse design that served as the basis for Everhart’s redesign.

The congressional gold medal was one of two civil rights themed projects reviewed.

Committee members sharply parted with the CFA over how to design a silver dollar commemorative to mark the 50th anniversary of the passage of the Civil Rights Act of 1964.

The commission had followed the recommendations of the United Negro College Fund, which will benefit from surcharges on the coin. The CFA-endorsed obverse design shows three young black people holding hands during a civil rights march. The commission also agreed with the College Fund that the design should show more diversity among the protesters.

For the reverse the commission had supported the fund’s endorsement of a design showing the words “Freedom,” “Equality,” and “Justice” over a graduate’s cap, which stresses the education provisions of the 1964 act.

Marks opened the discussion with a strong plea that protests should not be on the coin. Congress directed that the coin commemorate the results of the act — not the protests that led to the act, he said.

He urged the committee to back a “modern design” that he said “sends a powerful message about the act.”

That design shows an aerial view of the March on Washington inside the silhouette of the Liberty Bell. “I love this one,” Marks said.

For the reverse Marks suggested a design showing three flames that the Mint said were “intertwined to symbolize freedom of education, freedom to vote and freedom to control one’s destiny.”

The committee followed its chair’s suggestions, giving the obverse he recommended 24 points and 25 to his suggested reverse. No other designs came close to winning the panel’s votes.

The panel voted to recommend that the “In God We Trust” phrase be placed on the curve at the bottom of the coin instead of in a straight line. It also voted to enlarge the caldron from which the flames emerge on the reverse.

For the reverse of the 2014 Native American dollar coin, the CCAC also disagreed with the CFA.

The CFA had urged a design showing an Indian chief giving Meriwether Lewis critical advice on how to cross the Rocky Mountains on his and William Clark’s expedition through the newly acquired Louisiana Purchase.

Marks urged the coin, which is supposed to depict how Native American peoples supported Lewis and Clark’s expedition, depict a gift of horses from the Nez Percé tribe. However, that design drew 17 points to finish second.

The CCAC instead endorsed a design showing a Native American man offering a pipe and his wife offering fish, corn, roots and gourds. It had 23 of a possible 30 points. ¦