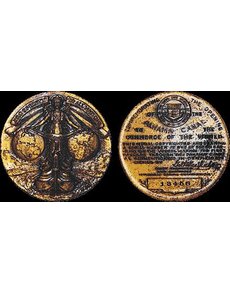 If authentic, a reader’s bronze medal is one of only 50,000 struck to commemorate the opening of the Panama Canal in 1914. Each was individually numbered and crossed the canal Aug. 3, 1914, on the ship SS Cristobal.

I’m enclosing pictures of two items I’ve owned for many years and I’m curious about their background or history.

The first piece is a Panama Canal commemorative medal. It is my understanding there were 50,000 of these struck and were on the first ship to transit the canal.

The second is a U.S. half dollar sized 1864 Abraham Lincoln campaign piece.

Though the SS Cristobal was the first to cross the newly opened passage, the SS Ancon, made the first “official” ceremonial crossing on Aug. 15.

So-Called Dollars lists the medal with the classification HK 398 and calls the medal “quite scarce.”

Mr. Liggett’s medal, if deemed authentic by an expert, would likely sell for somewhat less at auction, as it appears to display some circulation wear.

Regarding Mr. Liggett’s second piece, it appears to be a brass medalet. The obverse features a right-facing portrait of Lincoln with the legend ABRAHAM LINCOLN FOR PRESIDENT and the date 1864. The reverse features the legend US on its center, surrounded by an eagle, flags and staffs, cannon, cannon balls and olive branches.

A listing for this piece (classified as AL 1864-10) can be found in Edmund B. Sullivan’s American Political Badges and Medalets, 1789-1892. The medalet was struck in three compositions — copper-nickel silvered brass, brass and white metal. All are 31 millimeters in diameter, just a hair larger than a U.S. half dollar.

A note in Sullivan’s book states that this medalet was a companion piece to a George McClellan medalet (GMcC 1864-17) and a Ulysses S. Grant medalet (USG 1864-1).