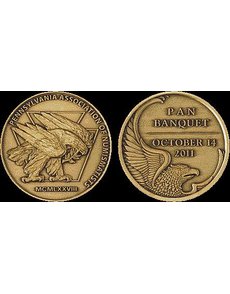 A limited-edition commemorative medal was presented to attendees of the Pennsylvania Association of Numismatists annual banquet held Oct. 14. It bears the club’s newly adopted logo, featuring an American eagle and Pennsylvania keystone.

The Pennsylvania Association of Numismatists unveiled its new logo, presenting a limited-edition commemorative bronze medal featuring the club’s new logo to each attendee at its annual banquet held Oct. 14 at the LeMont restaurant in Pittsburgh.

According to PAN President Thomas Uram, approximately 125 examples of the 1.5-inch-diameter medal were struck. The strikes were executed by Medallic Art Co. of Nevada.

The new logo is based upon a design by former U.S. Mint Chief Engraver Frank Gasparro and originally used for the reverse of the official Philadelphia Bicentennial medal issued in 1976 by Philadelphia ’76, Inc.

PAN had to receive the permission of the Unicover Corp. of Wyoming to use the Gasparro design for its logo.

The obverse of the PAN medal, designed with the participation of club members Uram, Benjamin Costello and Richard Jewell, features the new logo for the club — an American eagle with the Pennsylvania Keystone in the background. It carries the legends PENNSYLVANIA ASSOCIATION OF NUMISMATISTS and the date MCMLXXVIII (1978, the year of the group’s founding) in Roman numerals.

Gasparro’s original design for the Philadelphia Bicentennial medal depicts Philadelphia’s Independence Hall in the background behind the eagle.

Jewell provided Medallic Art Co. with an original Gasparro plaster, which it used to recreate the obverse design for the medal.

The reverse depicts an off-center eagle with the legend PAN/BANQUET/OCTOBER 14/2011.

Uram said that the club will be issuing more strikes, including 1.5- and 3-inch bronze versions, with space dedicated for personal engraving purposes, and a 3-inch silver version of the medal. For more information on how to purchase any or all of these medals, contact Uram at 412-418-0783.

For more information on PAN, visit the club’s website at www.pancoins.org. ¦