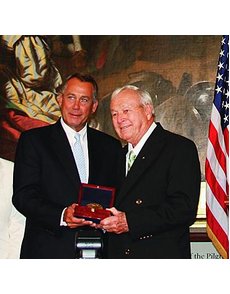 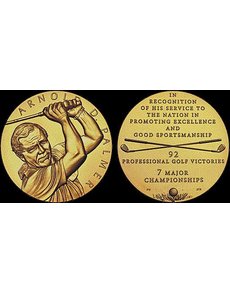 The 83-year-old golfer was presented his gold medal the same day in ceremonies at the U.S. Capitol Rotunda.

The medal was authorized under Public Law 111-65 and signed into law Sept. 30, 2009, by President Obama. The award was bestowed upon Palmer “in recognition of his service to the Nation in promoting excellence and good sportsmanship in golf.”

Palmer’s many accomplishments include winning 92 championships in national or international professional competitions, 62 of which were on the Professional Golf Association Tour; serving his country for three years in the U.S. Coast Guard; and serving 20 years as honorary national chair-
person of the March of Dimes Birth Defects Foundation.

Palmer has received many honors outside the sporting world, including the Patriot Award of the Congressional Medal of Honor Society, the Golden Plate Award of the American Academy of Achievement and the United States Navy Memorial Lone Sailor Award.

The reverse was designed by United States Mint Medallic Sculptor Phebe Hemphill and sculptured by United States Mint Medallic Artist Joseph F. Menna. It depicts a pair of crossed golf clubs and a golf ball on a tee surrounded by grass. The inscriptions are IN / RECOGNITION / OF HIS SERVICE TO / THE NATION IN / PROMOTING EXCELLENCE / AND / GOOD SPORTSMANSHIP / 92 / PROFESSIONAL GOLF VICTORIES / 7 MAJOR / CHAMPIONSHIPS.

The designer’s initials, PH for Hemphill and JFM for Menna, appear in the field to the left and right of the golf ball, respectively.

Orders are being accepted at the Mint online catalog at www.usmint.gov/catalog and by telephone at 800-872-6468. Hearing- and speech-impaired customers with TTY equipment may order the medals by calling 888-321-6468.

A $4.95 shipping and handling charge is added to all domestic orders.