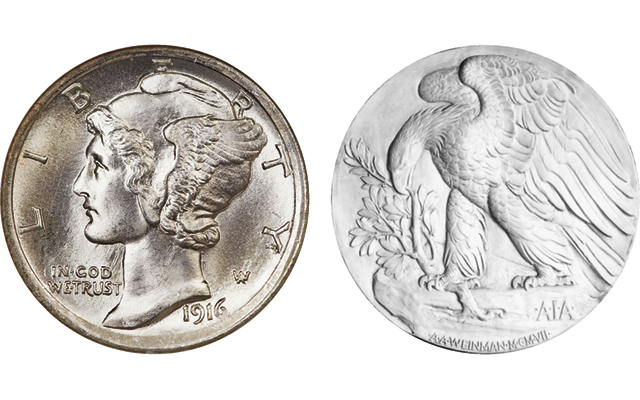 Should the U.S. Mint ever produce an American Eagle in palladium, the obverse is mandated to be the Winged Liberty Head dime obverse; the reverse, the reverse of the American Institute of Architects gold medal.

If the U.S. Mint does have plans to move forward with a palladium bullion coin, officials are not publicly sharing the news. Should we learn of a new palladium offering from the U.S. Mint, Coin World readers will be the next to know.

A U.S. Mint-commissioned feasibility study submitted March 1, 2013, to Congress suggests that while an American Eagle palladium bullion coin program for investors would likely be unprofitable, Proof and Uncirculated coins offered to collectors might draw limited interest, yet still be profitable.

The strongest demand for an American Eagle palladium coin would be during the first year of the program, the findings state. CPM Group bases that assessment on the newness of the program and speculation, which could draw interest from collectors and investors alike.

While demand would also likely be limited for Proof and Uncirculated collector versions, a numismatic coin program could still turn a profit, according to the findings.

The act mandates the American Eagle palladium coins to have an obverse with a high-relief rendition of the obverse of the Winged Liberty Head dime (1916 to 1945), and a reverse with a high-relief rendering of the reverse of the American Institute of Architects gold medal, introduced in 1907. Both the original coin and medal designs are the work of American sculptor Adolph A. Weinman.