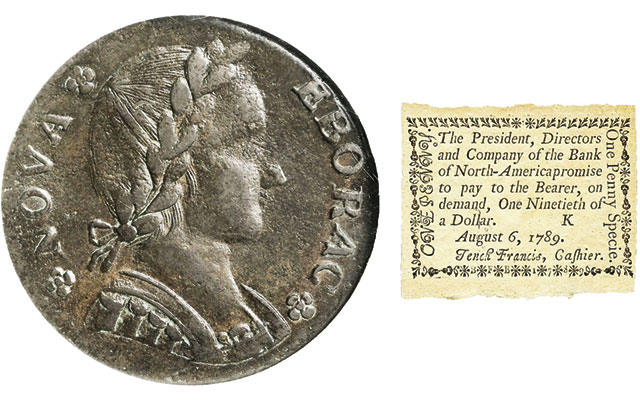 A Nova Eborac copper would pair well with a Copper Panic of 1789 scrip note from the Bank of North America.

Some things just plain go together. Restaurants have long realized this, pairing wine selections with a particular dish, or a tasty side dish that brings out the flavors of an entree.

Could a tasty numismatic side dish help bring out the flavors in a serving of Colonial coins? While collectors have long adhered to sequences in assembling their cabinets, such as getting one date and then the next, what if their collection was more binary in nature, with each object collected alongside another numismatic piece that enriched it?

Lots of Colonial coins could pair well with a medal, foreign coin, or paper money item in such a way that each becomes more interesting.

The 1775 and 1776 Virginia 15-penny notes, emblazoned with the denomination ONE PISTAREEN would,

of course, benefit from being collected along with the Spanish mainland 2-real coins popularly called pistareens in pre-Federal Virginia.

And a 1709 New York “Lyon dollar” note would be more interesting alongside one of the Leewendalers of the Netherlands that we still call “Lion dollars.”

So too, a 1775 Continental Currency $8 note would pair well with the Brazilian gold 6,400-real coin that was worth $8 in 1775 and inspired the note denomination.

Parliament ordered that hundreds of thousands of 1749 English halfpence and farthings be shipped to Boston to help pay for Massachusetts’ efforts in capturing Louisbourg from the French in 1745.  Perhaps a coin with that history would be best displayed alongside a 1748 medal celebrating the Peace of Aix-La-Chapelle, where the New Englanders mortal sacrifices were reversed around a treaty table, or the 1758 Louisbourg Taken medal that marked when the New Englanders took the fort again?

Any one of the Confederation-era coppers that resembled George II halfpence, including coppers from Connecticut, Vermont, and New York, would look nifty next to one of the halfpennies that inspired their design.

Those coppers would also become more interesting with one of the small scrip notes from the Copper Panic of 1789, when many of the low-weight coppers were finally driven from circulation.

The possibilities for natural pairings like this will expand as you delve further into the history of the Colonial era. Pairings could relate to specific historic events, design similarities, common designers and engravers, identical denominations, or any of a host of other aspects.

And you might just find that, as at a restaurant, sometimes the side dish is even tastier than the entree.