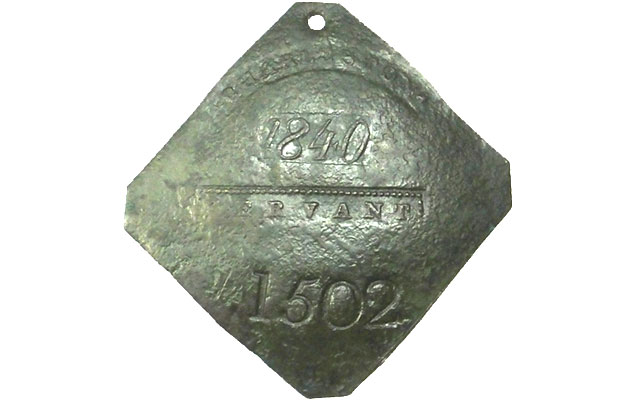 A circa 1840 slave-for-hire badge from Charleston, S.C., for a servant is one highlight of Numismatic Auctions LLC’s Dec. 1 sale. 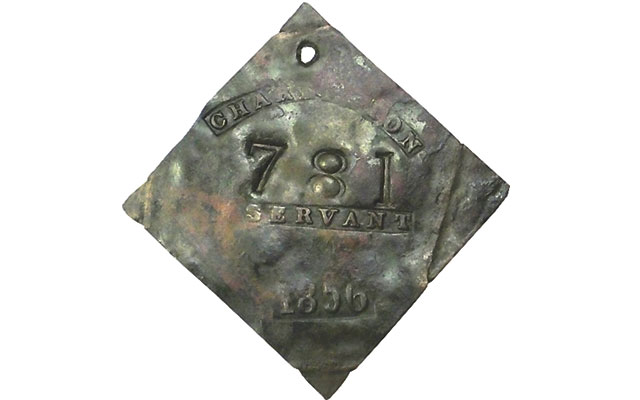 Another slave-for-hire badge from Charleston offered in the Dec. 1 auction was issued in 1856.

Slave-for-hire badges harken to an era when enslaved African-Americans who were rented out for their skill were required to carry badges. Each badge represented a license to ply a trade, and each license was valid for one year only. Once expired, the license number became invalid and the badge were “nothing more than a small piece of copper or brass,” according to an auction catalog from a Jan. 16, 2006, sale by Stack’s.

That auction of 65 pieces has been declared the “single most important collection ever auctioned,” the Stack’s catalog said.

According to the 2006 catalog, “Charleston’s system of slavery for hire represented the most institutionalized form of this ‘peculiar institution.’ ”

Both pieces in the Dec. 1 auction were purchased from the 2006 sale. In that sale, Paul West’s collection of Charleston and Charleston Neck, S.C., included slave badges for all but five years from 1800 to 1865, and include multiple rarities.

The badges also identified the slaves’ occupation, like porter, carpenter, or servant, and the role often dictated the size of the badge, according to the 2006 auction catalog.

“The Porter’s badge seems to have been the largest, perhaps because the occupation took the wearer onto the city’s streets where his unsupervised presence might otherwise have been contested,” according to the catalog.

West discovered most of his badges through metal detecting, and these pieces exhibit the roughness and patina indicative of many years in the ground.

The 1840 badge, with the serial No. 1502 on the obverse or face, is graded Very Fine, and has a dark olive green and brown patina. It is diamond-shaped but has clipped corners.

The 1856 badge, also diamond-shaped but with complete corners, carries serial No. 781.