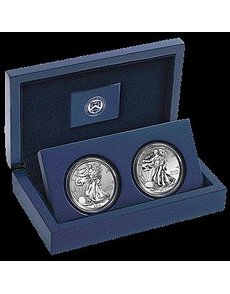 Some customers who ordered the 2013 American Eagle West Point Two-Coin Silver set have experienced shipping delays because of U.S. Mint shortages of packaging from an overseas manufacturer.

Delays by the United States Mint in the shipping of the 2013 American Eagle West Point Two-Coin Silver Set to customers are the result of packaging shortages.

Tom Jurkowsky, director of the Mint’s Office of Public Affairs, said Sept. 4 that the coins for the sets ordered have all been struck.

The sales total is final, but still remains to be audited as all orders are reconciled. The final total will likely be slightly different.

The coins were struck at the West Point Mint for the set that celebrates the 75th anniversary of the facility’s opening in 1938 as a silver bullion depository. The packaging for the sets is produced overseas and takes several weeks to be manufactured and shipped to the Mint.

“As is our standard practice, the United States Mint ordered a certain quantity of packaging up front,” Jurkowsky said in a prepared statement. “This initial order of packaging material represented more than 60 percent of the final net demand for this set.

“We had to wait until the ordering window closed before we could further determine our needs and place the final packaging order. The packaging is arriving in various quantities at various times.

“Each time a shipment arrives, the United States Mint at West Point quickly packages the sets and sends them to our fulfillment center where they are then delivered to our customers. Customers are not charged until their orders are shipped.”

Jurkowsky said U.S. Mint officials alerted customers at the time of purchase to expect possible delays in shipping by posting the anticipated dates the numismatic product would be shipped from its contracted order fulfillment center in Plainfield, Ind., and updating those dates.