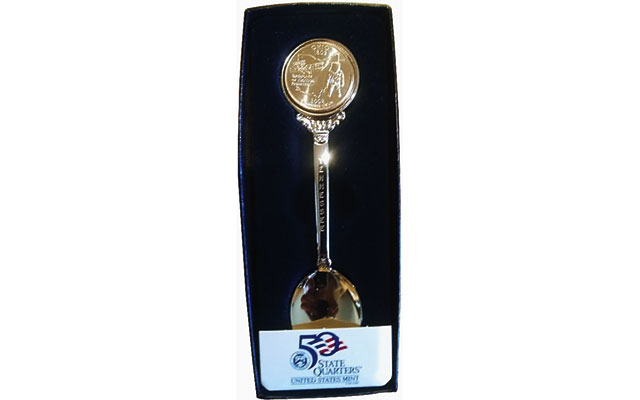 This souvenir spoon issued by the U.S. Mint during the State quarter dollar has an error. While the spoon’s handle is inscribed TENNESSEE, the coin attached is a 2002 Ohio quarter dollar.

I need some help. My father bought all of the 50 State quarter dollar spoons. But the Tennessee spoon has an Ohio quarter instead of a Tennessee quarter. I’m the only one who has owned it and I was wondering if the Mint made a mistake.

What you have is an assembly mistake of a product produced during the 50 State Quarters Program.

What its value is today is what somebody is willing to pay for it beyond the original $7.95 it cost when purchased directly from the Mint.

As part of the promotion of the 50 State Quarters Program from 1999 through 2008, the U.S. Mint issued for direct sale several licensed products containing the 50 State quarter dollars, including spoons. The spoons were made and assembled by an outside contractor.

An unknown number of Tennessee spoons were fabricated by a U.S. Mint contractor with Ohio quarter dollars.

Some of the earliest coin spoons had sales numbers totaling 20,000 or more, but the numbers dropped for successive issues. The Mint recorded selling roughly 5,000 of the 2002 Ohio quarter dollar spoons.

In a previous Coin World article, Editor-in-Chief Steve Roach reported that some of the earliest spoons can be acquired for well below issue price but some later issues cost in the $10 to $20 range.

An example of the 2001 spoon with Kentucky spelled KENTUCKEY on the spoon handle sold for $325 in a January 2015 eBay sale.

Carolina Coins, an online numismatic firm, currently offers the North Carolina spoons retail for $399.95 and the KENTUCKEY spoon for $199.95.

A firm spokesman said both spoons were among those issues that were only offered by the United States Mint for a short period.