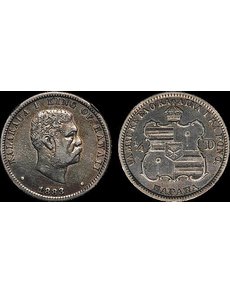 Before Hawaii was named the 50th state in 1959, it was a territory, and before that, it was the independent Kingdom of Hawaii with its own coinage.

In 1883 King Kalakaua I issued dimes, quarter dollars, half dollars and silver dollars designed by the U.S. Mint’s Charles Barber and struck at the San Francisco Mint.

When Hawaii became a U.S. territory, these coins were withdrawn and many were melted. However, the production far exceeded the needs of commerce and many survive, especially of the 1883 quarter dollar, of which 500,000 were struck (and 26 Proofs).

Although it resembles a traditional U.S. coin and has strong ties to regular issue U.S. coinage, the quarter dollar is a type that many if not most U.S. collectors are unfamiliar with.

That it is listed in A Guide Book of United States Coins (or the “Red Book”), along with other Hawaiian issues, confirms its potential for mainstream appeal.

In well-circulated grades the quarter dollar is very affordable, especially when considering its exotic nature and relative scarcity when compared with regular issue U.S. coins. For example, Heritage sold one graded Fine 15 by Numismatic Guaranty Corp. for $53 in a Dec. 18, 2012, sale.

In most Mint State grades the 1883 Hawaii quarter dollar remains relatively affordable. Attractive examples abound, like one graded Mint State 64 by Professional Coin Grading Service with a green Certified Acceptance Corp. sticker that sold for $367.78 at a July 14 auction. Both PCGS and NGC combined have had fewer than 1,000 submissions of the coin at this level or above.

At the high end are fewer than 20 examples graded MS-67, which trade at widely ranging prices. A richly toned example with a green CAC sticker sold for $4,600 at an April 26 Heritage auction while at the same sale a brilliant one — also MS-67 CAC — sold for $7,637.50.